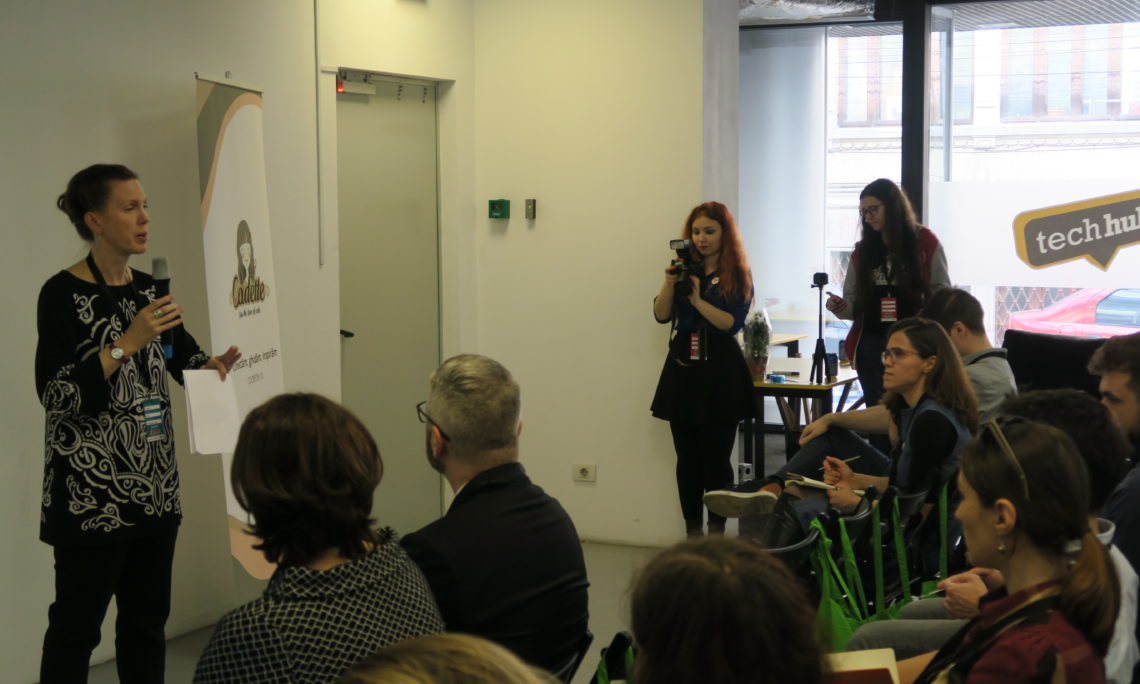 Hello everyone. Thanks for having me. I am very excited to be here. I thought I would start by telling you a couple of brief stories that I thought about when coming here and they both were things that happened to me when I was somewhere between your age and the age of my son, Steven, who is over there.

The first one was when I was playing soccer at school and I tripped and fell down. And the soccer coach came and said: Oh, are you ok, do you need a bandage, do you want to go out the field, are you feeling ok? And I said: No, I just fell down. I am fine, I want to keep playing. A few minutes later, a boy fell down and he was bleeding and the coach said: keep going! No problem, keep going!

So I had this impression that girls and boys were treated differently. And then, a little bit later, I think that summer, I went to a summer camp that was a computer camp. And back then – this was the 1980s – we were learning computer programming in Basic. I remember that we got to program a robot that wasn’t quite as nice as this robot and we got to use what we had learned in camp to make the robot do some little things: go back and turn. In that camp, we were about half girls and half boys and we all got to do the same thing. So, what I remember from that year in my life was that I had two experiences: one where I was treated differently and one where I was treated based on what I can do. I think that’s really neat about Codette and about what each of you is doing – is that it is not about what you look like; it’s about what you can do, what you are interested in and what energy you have.

We have a European initiative that you may have heard of called the Young Transatlantic Leaders Initiative (YTILI). If you haven’t heard of it, you can Google it, search it, find it out. It is a way to support young individuals like you all, who have started innovative and socially engaged smaller companies. And it is a way to support those innovators to help with job creation, with tools, with education. We promote it through our social media and through our partners so if you haven’t heard of it and you’re interested, please look it up. It’s another way in which we can support what you and your programs are doing.

One of our other programs is called GIST, which sounds a little better than YTILI – Global Innovation through Science and Technology. This program allows people to develop their skills, but also find mentors and connect with other people and I think often that is one of the most important services that we can provide, just connecting people, because I think all of us can think about something in our lives where somebody supported us or influenced us, or helped us, or inspired us in some way. And if we can play a role as the Embassy, as the United States in helping make those connections we would like to be able do that. GIST always also has another way that we can assist, which is through helping to find financing and that is obviously the other piece that is important: how do you get people to support when you’re new and make you more successful. That program, GIST, has a an international competition and Romania had one semi-finalist in this last year, so I encourage you all to again look into that program, maybe we can get some more Romanians to make it all the way through to the finals.

The U.S. also has a worldwide program called the Global Entrepreneurship Summit, which the first three years took place in the U.S. This year it took place in India and the focus of that summit was on women: “Women first, prosperity for all.” There are many, many studies that show when you support women, the whole economy grows. So one of the focuses of that entrepreneurship was exactly that — how can we support women entrepreneurs in a way that allows all of us to rise?

So, if I wanted to tie all those pieces together, what I want to say is: we at the Embassy want to be your partners, helping you do what you are interested in doing. Again, not because of who you are, but because of what you can do. So, especially given that this week, a couple of days ago, was International Women’s Day and the fact that it is so inspiring to be in a room with all of you, who are doing something that the world needs and that you’re passionate about, I hope that we can find ways to work with you to make you as successful as you can be. So again, thank you very much for having me. I am excited to hear a little more about what you all are doing and I am also excited that I met a robot who knows how to dance to Gangnam Style. It is not something that is a part of my job usually, so thanks for the opportunity.