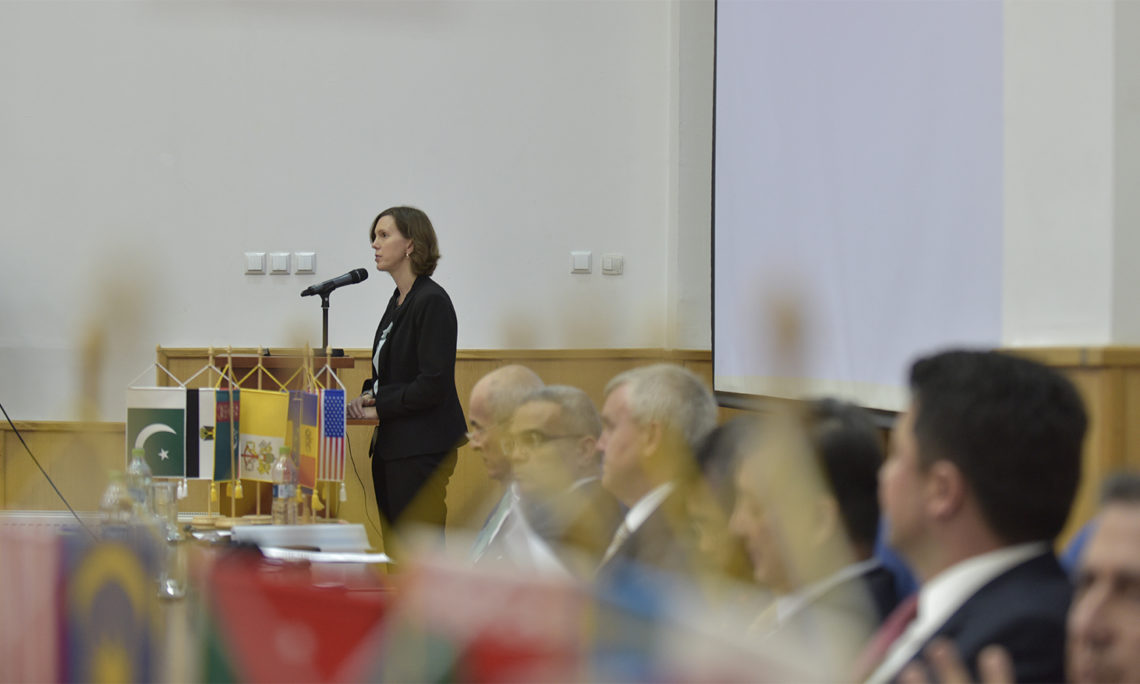 It’s a pleasure to be here today, in the city of Alba Iulia, to celebrate the centennial of modern Romania.  I mention, with a bit of humility, that the 28th President of the United States, Woodrow Wilson, had a not small part in the birth of modern Romania.  We are all familiar with his Fourteen Points, which specifically mention Romania and which were key to Romania achieving its independence.  Wilson was a man with a vision; a vision of diplomatic openness and national self-determination, ideals which today continue to serve as the basis of the United States’ role in the world.

I would like to take a brief look at Wilson’s career and highlight key issues that brought him to the ideals espoused in the Fourteen Points.

As governor of the State of New Jersey, Wilson increased the minimum wage, regulated factory working conditions, and passed a law punishing corruption in government.

Then, when he became President, Wilson also focused on domestic issues.  But he also noted, in his first inauguration speech, the role that the United States could play in rest of the world, but also warning of the possible dangers from those who might use power, not to serve the people, but to enrich themselves:

Wilson made these comments in the wake of a period of great economic expansion in the United States.  Wilson recognized opportunities and the challenges, so in his first year of office, he outlawed child labor, he signed a law implementing a federal income tax, and oversaw creation of the Federal Reserve System.  He was also the first president to hold regular press conferences.  His beliefs that transparency, free trade and a secure financial system would benefit all and ensure fair trade among nations, were principals which guided his efforts when negotiating the Treaty of Trianon years later.

Similar to President Kennedy a half century later, President Wilson also felt strongly citizens should take an active part in improving their communities.  He noted the responsibility citizens had to serve others, and not just look out for themselves.  He said for instance to a group of students:

Do not forget, then as you walk these classic places, why you are here. You are not here merely to prepare to make a living. You are here in order to enable the world to live more amply, with greater vision, with a finer spirit of hope and achievement. You are here to enrich the world and you impoverish yourself if you forget the errand.

It was this idea of service to others, as Wilson stated to the students, that later manifested itself in his vision of a League of Nations, a place where nations, regardless of size, population, or economic power, regardless of military might and technology, could come together as equals to ensure peace in the world and resolve differences in a deliberate and thoughtful manner.  While the results fell short of Wilson’s goals, this idea of peaceful resolution of issues between nations did, in later years, set the stage for the United Nations and other regional bodies which serve to promote reconciliation and negotiation as an alternative to armed conflict.

As World War I began, President Wilson focused on the security of American citizens and the ability of the United States to conduct trade with nations.  While he was criticized for not immediately leading the United States to the aid of European countries that were under attack by Germany, the Austro-Hungarian Empire, and the Ottoman Empire, Wilson took a longer view.  He said:

We are not trying to keep out of trouble; we are trying to preserve the foundations upon which peace can be rebuilt.

As the war continued, the United States realized it was no longer possible to remain apart from the aggression of the Central Powers, and in drafting the Fourteen Points Wilson recognized a new danger, the danger of military officials ruling over civilians and subjugating lands and people.  He said:

We must vindicate the principles of peace and justice against selfish and autocratic power.  We are glad to fight for the ultimate peace of the world and for the right of nations great and small and the privilege of men everywhere to choose their way of life and their obedience.

And thus Allies worked to the people previously subjected to Ottoman and German rule.  Romania, Serbia, Montenegro, Poland, and others, achieved their independence and the right to self-governance.

That right, in many cases, did not last.  In the aftermath of World War II, many of those same countries were again subjugated.  Many Romanians sacrificed so their children and future generations could live in freedom.  Because of their sacrifices, and the progress made, and Romania’s accession to NATO and the European Union, Romania has the power to chart its own destiny, and its own future.  But Romania and all of us should remain vigilant, and aspire to live up to the principals advocated by Wilson: universal principles of right and justice.  In a speech in Rome after the end of the war, Wilson reminded listeners, “We need the guidance of the people; we need the constant expression of the purposes and ideals of the people.”

Wilson changed the concept of how the world operates – not through secret agreements but through democracy and open dialogue.

I assure you the United States will continue to support Romania’s efforts as we work together to reach the goals envisioned by President Wilson when he worked to change the world view to one that is more free and open.