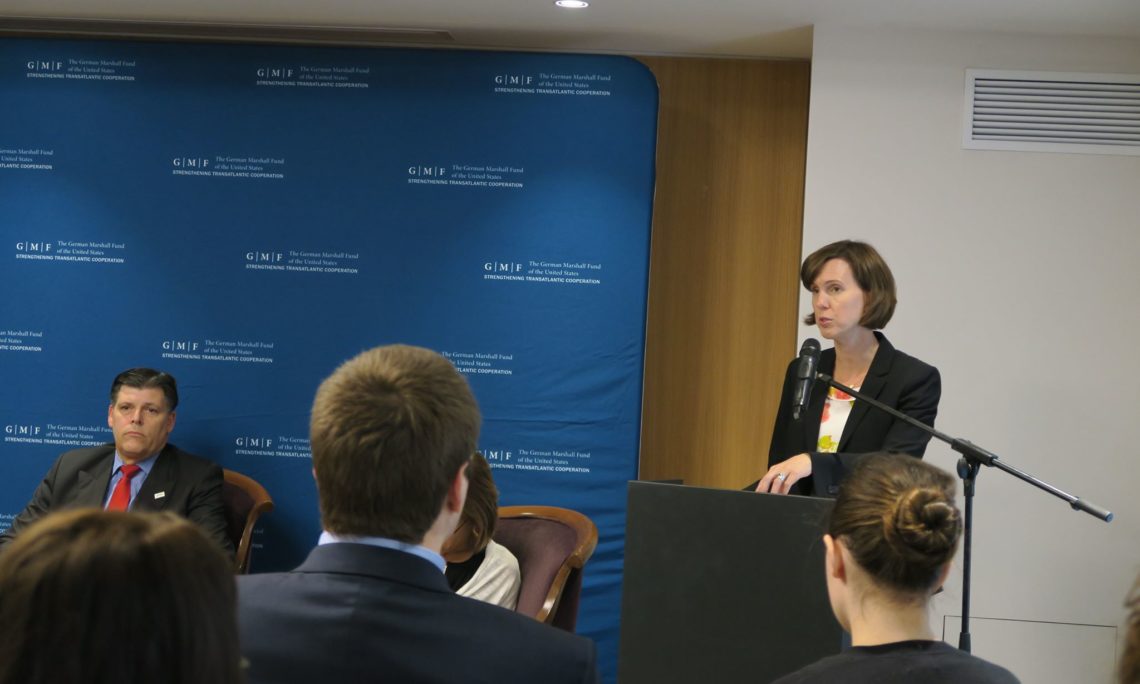 It’s a pleasure to be here to deliver some opening remarks to this event. I thought I’d start by first of all thanking the German Marshall Fund for this effort on coordinating our discussions on countering criminal information aggression and I think the most important piece of this is to have a conversation about what we can do together.

This year marks 30 years since the fall of Communism in Romania.  And for those 30 years, Romania and the United States with our partners have worked together to promote security, democratic governance, and economic prosperity.  We have successfully collaborated on defense, trade, human rights issues and many others.  And Romania has come so far since 1989.  However, old threats are reemerging in this new era.

There is no question that the Kremlin is attempting to weaken the credibility of America’s commitment to Europe, undermine transatlantic unity, sow discord in Western societies, and weaken Western institutions and governments.  The Kremlin’s use of influence campaigns to pursue these goals is unacceptable.

Russia – which invaded Georgia and Ukraine and continues to occupy parts of their territory — is not just an external or military threat.  Kremlin-orchestrated operations target national security, political stability, social cohesion, and economic prosperity.  And these activities are directed from the highest levels of the Russian state.

In Romania, Kremlin disinformation often seeks to undermine security and defense initiatives.  The Kremlin uses different lines of thinking to target different audiences:  they portray Romania’s military defense as, alternatively, Russophobic paranoia, useless in the face of Russia’s military prowess, or an offensive threat that justifies military interventions by Russia.

One example – we have seen information aggression against the Deveselu anti-ballistic missile base, where Romanian and American soldiers work together to protect all of Europe from missile attacks from the Middle East.  The Kremlin media outlet Sputnik has long claimed, falsely, that Deveselu exists to provoke Russia and is aimed at Russian cities and military targets.

Again, Russia wants to turn our allies, including Romania, against the West, challenge our shared values, and weaken western institutions.

By spreading false narratives in the news media, distributing emotional and sensational memes and conspiracy theories on the internet, and employing trolls and bots to drive discordant and inflammatory dialogue, the Kremlin seeks to drive a wedge not only between Romania and its allies, but also among Romanians themselves, undermining confidence in their own institutions and inflaming any existing tensions in society.

So, what are we doing about it?  In response, on the U.S. government side, we take a holistic approach to identifying, tracking, and countering Russian malign influence.   And I know Assistant Administrator Brock Bierman will talk a little bit about this as well.  We are working with our Allies and partners to identify, recognize, and expose Russian disinformation and other tactics, and to promote accurate messages about the U.S. and our Allies.  In particular, the Department of State works with Allies and partners to build collective resilience, share best practices, and impose costs on actors which carry out these malign influence campaigns.

Our National Counterintelligence and Security Center advises and informs decision makers about foreign intelligence threats to the U.S. and helps U.S. Government partners to identify approaches to counter them.

Our Department of the Treasury disrupts and interdicts financial threats to U.S. national security, including by issuing sanctions targeting malign actors.

And our Department of Defense works with our partners on messaging and promoting fact-based narratives about U.S. military activities.  It also leverages its defense relationships with Allies including Romania, to build capacity and demonstrate the U.S.’s enduring commitment and resolve.

In Romania, our mission has organized multiple debates, roundtables, webinars and speaker programs in Bucharest but also throughout the country to address the threat of Russian disinformation and encourage stake-holders’ civic participation in countering fake news and encourage media literacy education.  Public discussions like this one are integral to civic engagement and a well-informed citizenry.

We also give grants to Romanian non-governmental organizations to identify and combat propaganda and produce academic and pragmatic guides to address the threat of disinformation, but maybe even more importantly, to increase media literacy and critical thinking tools for teachers and for schools.

We have sent Romanian journalists, academics, and teachers to the U.S. and on programs throughout Europe to exchange best practices on combatting fake news and promoting media literacy.

When we work together, we can create a robust, coordinated response to Kremlin information aggression in Romania and throughout Europe.  That is our goal.

When we look at the big picture, we want to make sure that in the future we see a Russia that respects the sovereignty of its neighbors and the rights of its own people.  We have been clear, even as we have pushed back at its influence, that the door to dialogue is open, should Russia take credible steps toward a constructive path.

As U.S. Secretary of State Michael Pompeo said, “we’re hopeful that we can put our relationship with Russia back on a better footing, but the onus is on Russia to change course.”

Concluding on what I hope is a hopeful note, I want to thank you very much for your time, and thanks again to the German Marshall Fund for hosting this important discussion.  And, I would also like to introduce USAID Assistant Administrator Brock Bierman for some remarks.