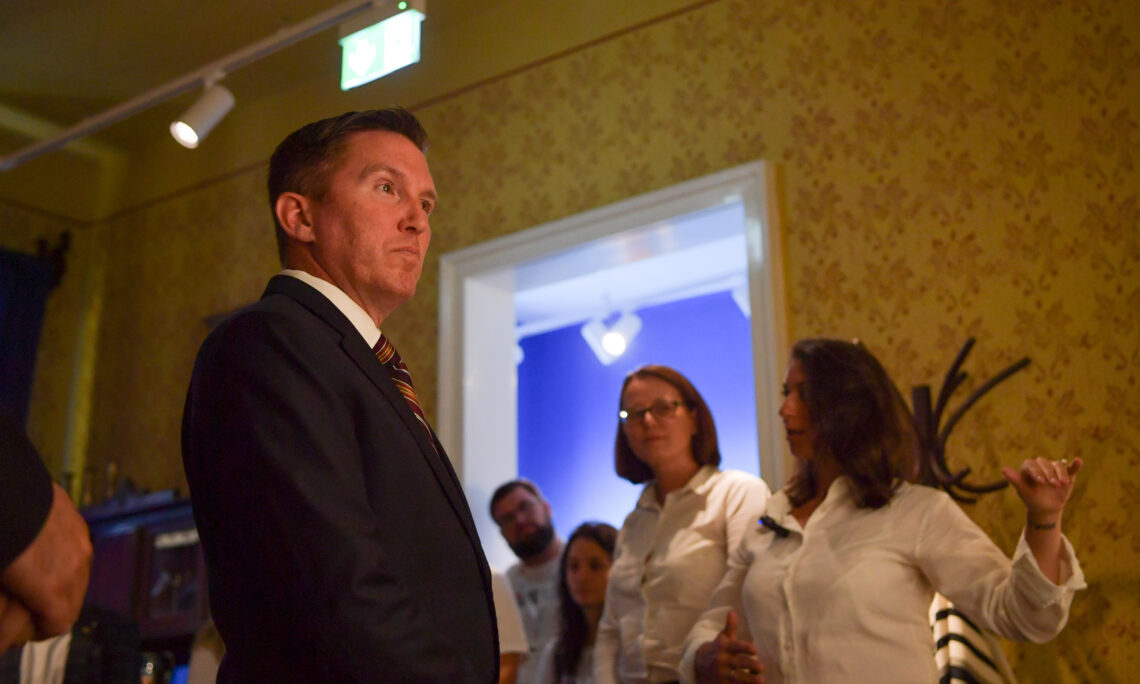 Mayor Moldovan, Director Barz, and Coordinator Marincean it is a pleasure to join you here. Mayor Moldovan, thank you for our meeting yesterday—I came away from it very informed…Good morning everyone, and thank you all for welcoming me and our Embassy team to Sighet. Your region’s reputation for hospitality and historical beauty are clearly well founded.

Our nations and our peoples stand on 142 years of a diplomatic bedrock founded on friendship. Our partnership is not nascent, nor is it new or untested. Throughout our shared history there are moments that are definitional: from a spring day in 1878 when our then-Galați-based U.S. Consul arrived in Bucharest to deliver U.S. President Rutherford B. Hayes’ letter acknowledging Romanian independence and sovereignty, to our well-known Red Cross efforts in the years following World War I, the United States and its peoples have always striven for the best for our friends…and now Allies, the Romanian people.

As I know many of you are aware, we have also just marked another defining bilateral moment—25 years since the signing of the U.S.-Romania Strategic Partnership. 25 years since President Clinton proclaimed in Piata Universi—tatii, “The Romanian people have won the world’s respect for moving so far, so fast, and for believing in yourselves and your future…” He could not have been more prescient in what he saw in this nation and its peoples; nor could have Romania’s former President Constantin-escu when he replied, “We have laid this bridge built by human beings across an ocean which God has set between you and us. It is a bridge of common values.” Together these two greats created our Strategic Partnership—and thank goodness they did. The benefits of this quarter century of Alliance, friendship, and partnership are remarkable, they are tangible, and the world is the better and safer for them.

It is in that spirit of open friendship that I join you here you today. Friends and Allies protect and preserve the treasures of those they stand alongside. Romania’s incredibly long history and its unique blend of cultures and peoples lives in its national patrimony. Its stories…your stories…eternally dwell in the art, the literature, the architecture, and the memories that define this nation. When a real friend has the chance to help preserve this…not just for Romania…but for all of humanity, it must. That brings me to the Ambassadors [sic] Fund For Cultural Preservation. A government program of which I could not be prouder. Since its inception in 2000, this Fund has helped the U.S. Department of State preserve historic sites, manuscripts, museum collections, and traditional forms of expression, in countless countries.

We at Embassy Bucharest have maximized this tool to enormous effect. I am markedly proud that we have funded over one million dollars in renovations and preservation efforts across Romania. For several years, our half-million-dollar grant for the restoration of the fortified church in Alma Vii was the world’s largest. This year is no exception, we have just secured an additional $60,000 in funding for the preservation of the Jewish Cemetery in Alba Iulia.

These endeavors are indeed costly, but the results are priceless. If we lose these human treasures, they will be gone forever. This is precisely why we are here in celebration of the renovation and restoration works at the living museum that is the Elie Wiesel Memorial House. Our Ambassadors [sic] Fund grant is being used here to guarantee we never lose this reminder of both the indomitability of the human spirit and the ever- present ability of our species to slip into unspeakable evil. How could one possibly assign a cost-value to these walls which our so central to international Jewish heritage, this region’s unique culture, and to all peoples?

Preserving this monument could not be timelier. This is true both for practical reasons-it is always easier to preserve than to repair, but also for far more profound reasons. This home bears mute testimony to blind antipathy. And we are seeing far too much of this afoot once again. Your neighbors a kilometer away have been plunged into an unjust war by the same capital that wrought so much death and destruction in the 20th Century. War, and its fellow travelers of xenophobia and anti-Semitism, are again loose on this continent. We see it here with malign influence and propaganda peddling—both by foreign state actors and domestic extremists…This is vile and shame on them one and all. All we can do is be vigilant, counter with the truth, and remember. This museum will help us do just that. In beautiful Romania—a nation with the awful distinction of having lost among the very highest number of its innocent Jewish population to the Nazis and their co-conspirators from a spectrum of nations—including its own, there is no alternative.