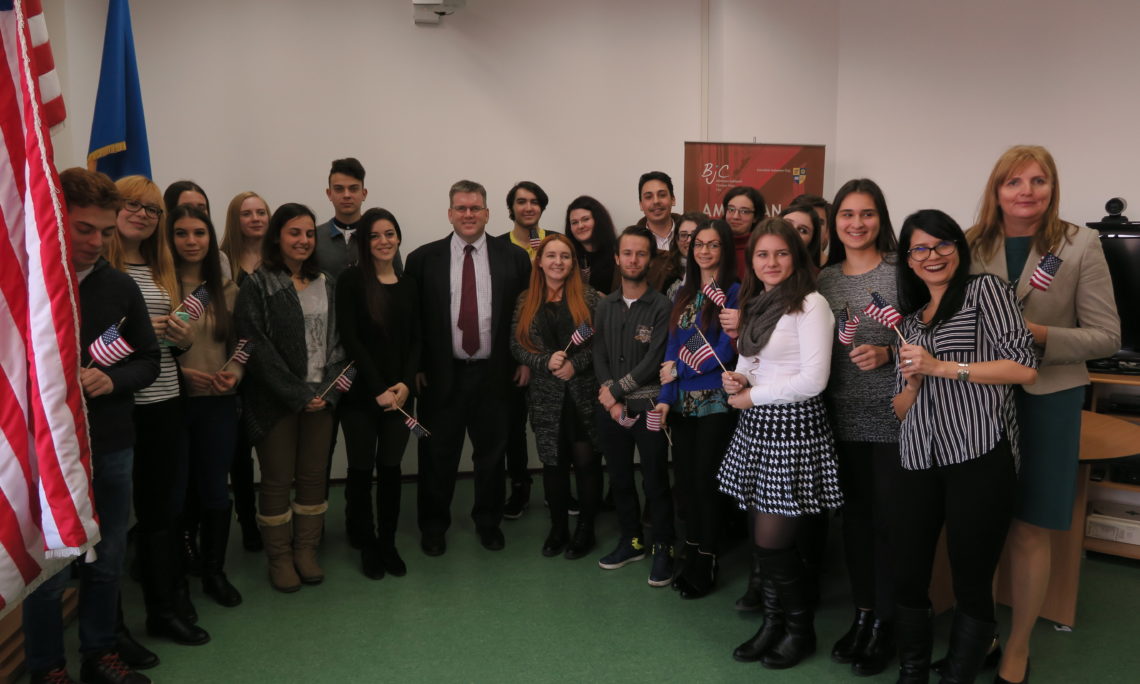 We couldn’t have celebrated this important anniversary today without our friends and partners from Cluj County Council, Cluj-Napoca City Hall, professors, high school and university students, representatives of non-governmental organizations and professional associations, libraries, museums and other cultural and educational organizations, as well as the local media.

So, thank you all for being here.

I am honored to officially open the week-long events marking the 10th anniversary of the American Corner Cluj-Napoca at “Octavian Goga” Cluj County Library, a prestigious institution that we are proud to be associated with.  Now, as along the past ten years, we are pleased to join forces with Cluj County Library to help meet the information needs of Romanians who are interested in learning about the United States of America.

As part of  the worldwide network of over 700 American Spaces and similar to the other eight corners in Romania hosted by libraries in Bacău, Baia Mare, Bucharest, Constanţa, Craiova, Iaşi, Timişoara, and Târgu-Mureş, the American Corner Cluj-Napoca enables us to build and strengthen bilateral relationships.  It represents a public diplomacy platform which advances American culture and values, promotes the learning of English, encourages study in the United States, and fosters a real dialogue with the audiences in Cluj county.

The American Corner Cluj-Napoca distinguished itself among the American Spaces in Romania both in terms of statistics – 126 programs during October 2015 – September 2016 – and in terms of the variety and complex programs it organizes.

The AC Cluj-Napoca focuses on developing youth’s entrepreneurial and social skills via specialized courses with local NGOs expertise.  The corner has successful English Language Learning programs such as “Shorts Club,”- screenings of short documentaries and animation films followed by discussions – “Reading Club,” “English Language Conversation Club,” “Board Games Club” – for socializing, role-playing, literacy skills, and English language conversation – and the “Battle of the Books” national contest, based on the American Library Association model.

Moreover, the AC Cluj-Napoca is the only corner with an “e-Graphic Club,” which promotes the use of the latest technology, as well as creativity and innovation among youth.  This club is coordinated by a local graphic artist who uses the AC Cluj-Napoca reference collection and the corner’s WACOM graphic tablets.

It is worth to mention that the AC Cluj-Napoca is the only corner in Romania with a “Children’s Corner.” Appropriate programming in this space contributes to developing children’s early-literacy skills and communication abilities.  Strategically speaking, this space attracts the future adolescents to both the corner and the library.

I would like to praise the local authorities for their continuous funding and assistance for Cluj County Library valuable projects; many thanks to the Library Manager, Sorina Stanca, and the Library Deputy Directors, Ica Moşoiu and Letiţia Popa, as well as to librarians in Acquisitions, Cataloguing, Marketing, and IT for their constant support of the American Corner Cluj-Napoca activity.

Special thanks go to the Head of the Library Reading Rooms, Information and Corners, Georgeta Dodu, and the American Corner Coordinator, Cătălina Marincaş, for keeping abreast with the latest trends of the American Corner program worldwide, for their creative programming at the corner and their sustained efforts in attracting the local public to the American Corner.

Thanks to Cluj County Library team, the recently renovated American Corner Cluj-Napoca is a modern space for conversations, where the audiences can connect and learn about the United States.  It is also a place to learn new skills or improve existing ones, such as entrepreneurship, presentation and communication abilities, English language competences, and how to use the latest technology.  At the same time, Cluj County citizens can find answers to questions about the U.S. and issues of global concern such as human trafficking, climate change, economic welfare, and international security through speaker programs, both in person and via digital video conferences.

And, last, but not least, I would like to thank all of you.  You are not only our invitees, but our valued partners.  With your ideas and your participation you created a vibrant American Corner, with informative and interactive programs that connect the Romanian public to contemporary American society and contribute to a better understanding of United States history and culture.