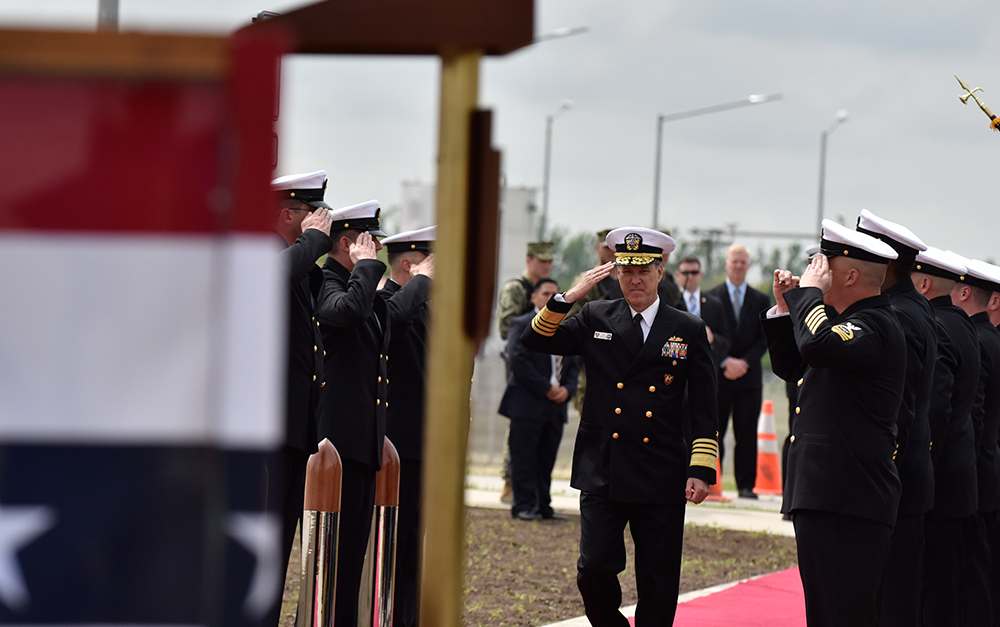 Today the United States and Romania make history in delivering this system to the NATO Alliance.  Many individuals from both of our countries made this day possible.  From the United States, I would like to recognize the team from the Missile Defense Agency for leading the construction and the testing programs.  I would also like to recognize the US Navy’s Fleet Forces Command in Norfolk, VA for their preparation of the watch teams, and the US SIXTH FLEET in Naples, Italy that will oversee operations of the system.  Most importantly, I would like to recognize the Sailors who will stand watch today and in the future in support of the Defense of Europe.

Ambassador Hans Klemm, thank you as well, for the invaluable assistance you and your team has provided.  Ambassador Klemm would be the first to say, however, today is a reality primarily because of the sustained support of the Government of Romania, beginning with the President and Prime Minister, and encompassing many ministries and departments.  We are grateful to count Romania as an ally and recognize that your commitment to the defense of a free Europe made our success possible.

We have been working towards this day since President Obama’s commitment in September, 2009 to the European Phased Adaptive Approach.  From the selection of this site in 2011 and initial groundbreaking in 2013, both of our nations have moved rapidly to make this project a reality.

Today, this site joins the four U.S. Guided Missile Destroyers in Rota, Spain in reaching Phase II of the European Phased Adaptive Approach.  As we cut the ribbon, the watchteams are trained and ready, the system has been tested, and we are now in the progress of integrating this site into the NATO integrated Air and Missile Defense Architecture.

Phase II will be accomplished in less than six years from the 2010 Lisbon Summit, underscoring the commitment of the United States to Romania and NATO.  My personal thanks to the Chief of Defense, General Cuica, and all of you who supported our joint efforts.  Thank You!

I now have the opportunity to welcome to the podium the Prime Minister of Romania; Dacian Ciolos.  Prior to his distinguished political career Prime Minister was an accomplished agronomist with a Bachelor’s degree in Horticulture Engineering and Masters and Doctorate degrees in Economics of Agricultural Development.

Prime Minister Ciolos entered public service in 2002 as part of the European Commission’s delegation to Romania and has spent time in a variety of distinguished posts including the Agriculture and Rural Development Minister for Romania as well as the European Commissioner for Agriculture and Rural Development.  He was appointed Prime Minister by President Iohannis in November of 2015.