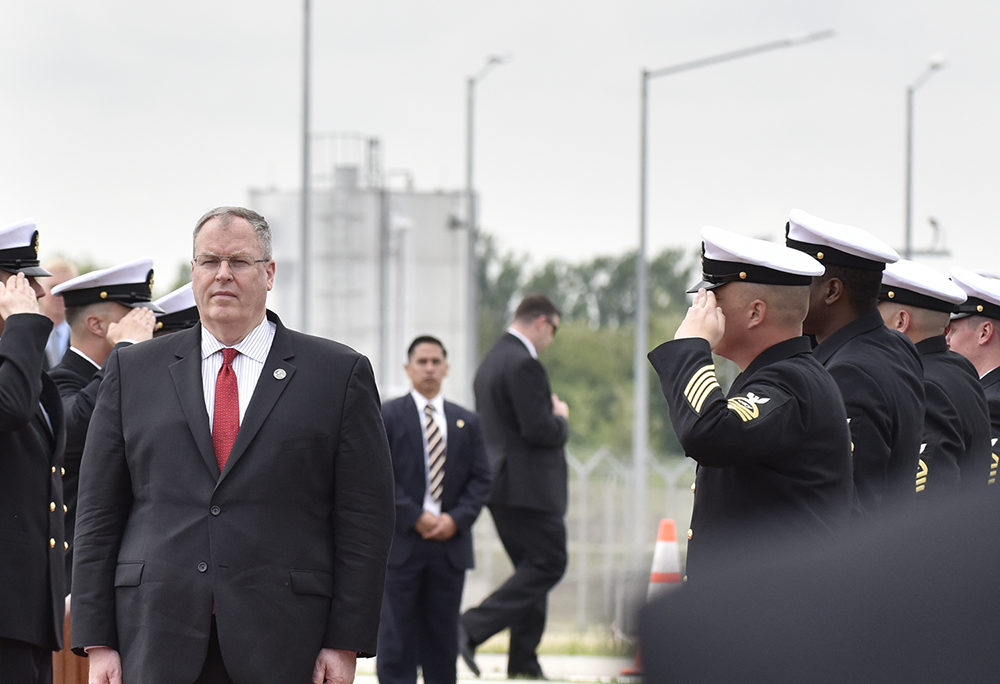 Good afternoon.  It’s a real pleasure for me to be here on my first visit to Romania.  I only wish I could stay longer to see more of this beautiful country.  I want to thank President Iohannis, Prime Minister Ciolos, and Minister Motoc for being such gracious hosts during my visit.  I also want to thank Secretary Stoltenberg, Admiral Ferguson, and Vice Admiral Syring for joining us on this special occasion.

Since we broke ground at this site back in October 2013, much has changed in this region and around the world.  We are at an inflection point in the strategic landscape.  As part of that landscape Europe, and by extension NATO, is facing a significantly changed and more complex security situation than the one we faced in 2013.

Addressing this new security environment will require a more capable Alliance – one that continues to evolve and adapt to threats, both old and new, in order to ensure transatlantic security.  As we approach the NATO Warsaw Summit, it is critical that the Alliance continues to show unity and solidarity.

As we work to address the common challenges we face, we do so with the confidence that Romania is a steadfast Ally upon which we know we can depend – as you have demonstrated by your actions again and again.  Let me tell you, that dedication and commitment does not go unnoticed by the United States.

Romania understands the importance of modernizing its military and continues to dedicate significant resources towards that goal as well as contributing towards NATO and other missions.  I want to commend the Romanian government on its pledge to increase defense spending to 2% of GDP by 2017.  Romania is one of the highest contributors to the Resolute Support Mission in Afghanistan, where 650 Romanian troops currently serve, and was one of the first partners to offer support in the Counter-ISIL Coalition.   Romania also contributes to global and regional peacekeeping missions and operations such as KFOR in Kosovo, EUFOR in Bosnia Herzegovina, and has been a key leader in the Black Sea region.

I want to take a moment, on behalf of Secretary Carter and the Department of Defense, to express our deepest condolences for the loss of two Romanian soldiers in Afghanistan on Saturday.  Romania has given blood and treasure, to include 25 casualties and 132 wounded in action up to this point, and their sacrifice will not be forgotten.

We greatly appreciate the hospitality the Romanian people have shown towards United States personnel.  Romania has hosted hundreds of U.S. troops whose deployment was made possible by the European Reassurance Initiative as well as U.S. Marines assigned to the Black Sea Rotational Force.  MK Air Base serves as a hub for OPERATION ATLANTIC RESOLVE, and previously was a critical check point for U.S. troops coming in and out of Afghanistan.

Today we are here to celebrate another important endeavor in the U.S.-Romania relationship – this Aegis Ashore Missile Defense System.   Having conducted a series of exercises to validate the integration of the Aegis Ashore Missile Defense System – Romania, this event marks the operational certification of the site and the fulfillment of Phase 2 of the European Phased Adaptive Approach (EPAA).  The EPAA is the U.S. voluntary national contribution to NATO’s ballistic missile defense, but it would not have been possible without the support of Romania’s government and its people, who understand the security benefits this capability provides to all of Europe.  As planned from the outset, this site will operate in the NATO context, so I’m happy to see NATO Secretary General Jens Stoltenberg here as well.

This site — in addition to the four U.S. Navy BMD-capable Aegis destroyers in Rota and the AN/TPY-2 radar in Turkey that were part of EPAA Phase 1, and the SM-3 1B interceptor on ships and ashore — provides both a quantitative and qualitative increase in NATO’s BMD capability and capacity and strengthens NATO defensive capabilities.

As long as Iran continues to develop and deploy ballistic missiles, the United States will work with our Allies and partners to defend against this threat.  I want to make clear – neither this site nor the site going into Poland – will have the capability to undermine Russia’s strategic deterrent.  It is a defensive system that is fully compliant with existing arms control regimes.  NATO BMD serves as a capability to protect the Alliance from any ballistic missile threats from outside the Euro-Atlantic area.

Lastly, I want to commend NATO for demonstrating, once again, the strength of the Alliance.  As it has for nearly seven decades, NATO remains the guarantor of prosperity and stability on this continent.  As we go forward, we will continue to work together to ensure the countries of Europe can make their own security and economic choices, free from coercion or intimidation.