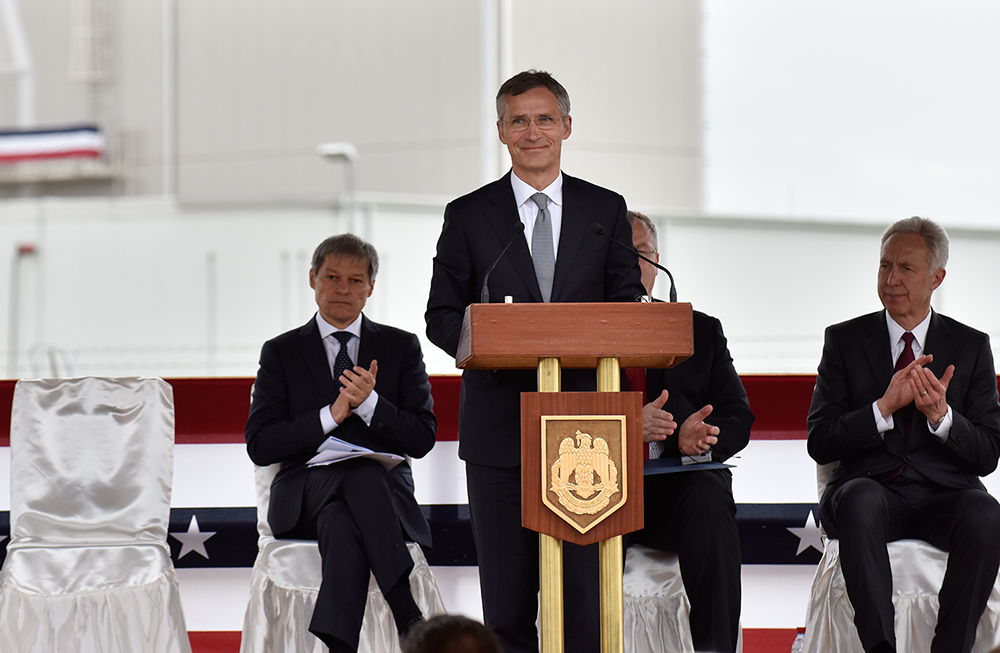 Thank you for that welcome.

Today represents an important moment for NATO and for transatlantic security.

This ceremony means that the United States’ AEGIS Ashore system here at Deveselu is certified for operations.

This represents a significant increase in the capability to defend European Allies against the proliferation of ballistic missiles from outside the Euro-Atlantic area.

I want to thank the United States government and military for your strong commitment to Euro-Atlantic security.
And for their important contribution to NATO missile defence.
That includes the skilled sailors and soldiers stationed here.
Your dedication and professionalism are helping to keep our nations safe.

I also want to thank the Romanian government and people for the contribution you are making to our collective defence in hosting this site.

This is transatlantic teamwork in action.
And many Allies are making important contributions.

Poland will break ground on another Aegis Ashore site tomorrow.
Spain hosts the four US missile defence ships.
Turkey hosts an important early-warning radar station.
Germany hosts the command centre.
Denmark and the Netherlands are upgrading their frigates with radar capabilities.
And the UK has committed to investing in ground-based radars.

NATO’s core mission is to protect our citizens and territory.
Our Alliance has remained united for six decades, committed to our solemn pledge to defend each other.
Today, as we face the biggest security challenges in a generation, our Alliance is as important as ever.
And as threats continue to change, we continue to adjust our response.

The threat to NATO Allies from ballistic missiles outside the Euro-Atlantic area is real.
Many countries – including several in NATO’s neighbourhood – are seeking to develop or acquire them.

So missile defence is essential to our common security.
We decided to develop NATO’s missile defence capability at the Lisbon Summit in 2010.
We have been building the system in a transparent way ever since.
We are doing what we said we would do.
And we continue to be clear and open about the system’s focus and capabilities.

Our missile defence programme represents a long-term investment against a long-term threat.
We have been building the system for the last six years, because we need to be prepared.
And we are making steady progress.
As the name suggests, the capability we have developed is purely defensive. This is important.

NATO missile defence in no way undermines or weakens Russia’s strategic nuclear deterrent.
This site in Romania – as well as the one in Poland– are not directed against Russia.
The interceptors are too few, and located too far south or too close to Russia, to be able to intercept Russian intercontinental ballistic missiles.

They are designed instead to tackle the potential threat posed by short and medium- range attacks from outside the Euro-Atlantic area.

We have made this clear to the Russian authorities.
Many times, and at the highest level.

From the start, NATO offered transparency, dialogue and cooperation to Russia on missile defence.
Russia did not respond positively to our offers.
In fact, Moscow terminated this cooperative dialogue unilaterally in 2013.
This remains an issue of concern.
However, the Alliance will continue to engage in dialogue with Russia when and where we can.
In times of tension keeping channels of communication open is even more important.

This site shows that NATO is adapting to an uncertain world.

And investing over the long-term in the capabilities we need.

We will be taking further decisions on our ballistic missile defence, and many other issues, at our upcoming summit in Warsaw.

Because we will never compromise on our commitment to protect our citizens.
We can and we will respond to any threat from any direction.

Thank you to everyone for your hard work in making today possible.

Your endeavours make an unpredictable world a safer place to live.