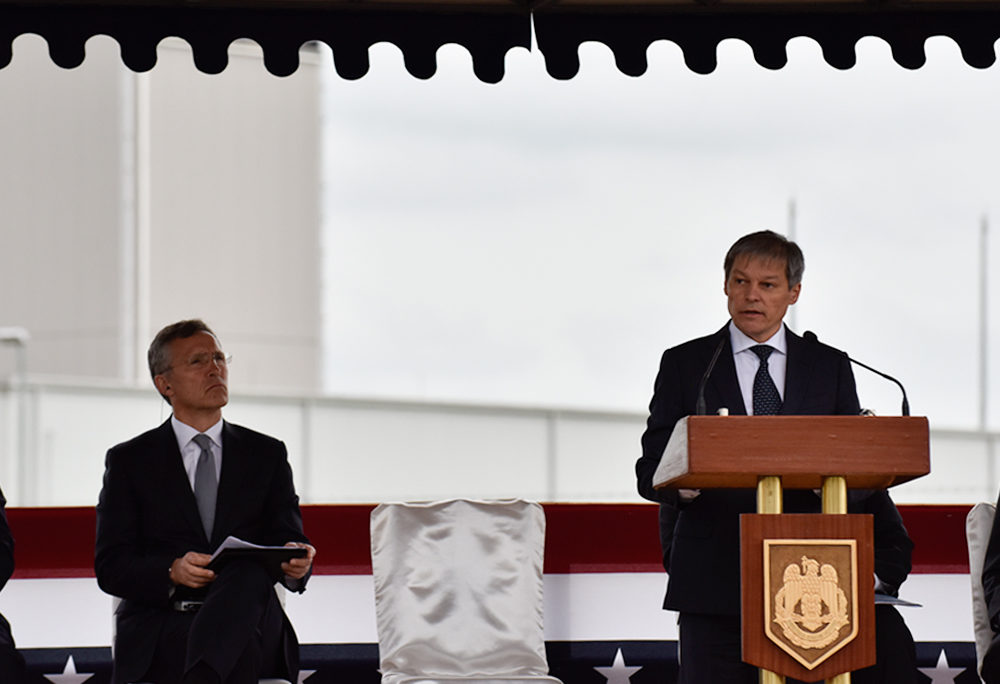 Secretary General,
Deputy Secretary of Defense,
President of the Romanian Senate,
Ministers,
Your Excellencies,
Dear members of the military, diplomats and local officials,
Ladies and Gentlemen,

It gives me great pleasure to be at the Deveselu Military Base today with you – Romanian, American, North-Atlantic Alliance officials, together allies and friends – to mark the inauguration of the Aegis Ashore Facility, an essential element of Phase II of the U.S. European Phased Adaptive Approach and a future component of the integrated NATO missile defense system.

Our presence here is a testament to the special importance of this moment for both Romania and the United States, and the North-Atlantic Treaty Organization and European security at large.

In the context of the increasing ballistic missile threat from state and non-state actors outside the Euro-Atlantic area, the United States of America have assumed a valuable contribution to the Allied missile defense architecture through the European Phased Adaptive Approach to Missile Defense.  In 2010, Romania decided to participate in this complex system, thus considering that the overall security of our country and geographical region will considerably increase.

Following the decisions adopted at the Summits in Bucharest (2008) and Strasbourg/Kehl (2009), NATO heads of state or government gathered in Lisbon in 2010 decided to develop NATO missile defense capabilities to protect all populations, territory and Allied Forces in Europe, as an objective of collective defense.

After that NATO landmark, continuing and in the spirit of our excellent bilateral relations attested by the Romanian-American Strategic Partnership, after seven fruitful rounds of negotiations, in 2011, the “Agreement between Romania and the United States on the Deployment of the U.S. Ballistic Missile Defense System in Romania”, a document which set the legal foundation for this impressive purely defensive military project beneficial to our Euro-Atlantic security.

I thank all civilians and members of the military who made significant institutional efforts, both in Romania and in the United States, so that today, less than two months prior to the NATO Summit in Warsaw, we can participate in this ceremony inaugurating the Aegis Ashore Missile Defense System in Romania.

The Deveselu Missile Defense Facility is an essential component of the Strategic Partnership with the U.S. and it also represents a major incentive for the development of privileged relations between Romania and the United States also in other common interest fields (economy, education, people-to-people relations, etc.).

The security environment continues to be affected by challenges, threats and risks against the European and Euro-Atlantic space. In the Eastern neighborhood, we note both the perpetuation of frozen conflicts, and the emergence of new conflicts, which confirm – if this was still needed – the strategic importance of the Black Sea region in the Euro-Atlantic area security and stability equation.

In the Southern neighborhood, against the backdrop of instability in the Middle East and Northern Africa region, we witness the unprecedented escalation of migration, simultaneously to the terrorist threat and the projection of ISIL/Daesh-related security risks in Europe.

Today, through this project we concretely contribute to the implementation of the vision proposed by the National Defense Strategy, for a strong Romania in Europe and globally, out of deep respect for the citizens. For this, we need policies and credible means that can defensively act against current and future threats, in full accordance with international law.

The Deveselu facility fully respects these desiderata, respects the UN Charter provisions and is not directed against any one in particular. The Deveselu Facility is a means destined exclusively for legitimate defense against ballistic missile threats, it strengthens the NATO missile defense capabilities and expands the area covered and protected to Allied countries in Southern and Central Europe, significantly reducing the risk of potential attacks with ballistic missiles from outside the Euro-Atlantic space.

Deterrence is gaining an increasingly more important role in the current volatile security context, and in concurrence with a strengthened defense, including missile defense, it creates the premise necessary for increasing security, an essential aspect in this NATO and EU border region.  Together with the other elements of the missile defense system provided by the Allies, Aegis Ashore Romania contributes to the North-Atlantic security and collective defense.

We have seriously respected the commitments taken under this project so that the Deveselu Facility meets the requirements necessary for functioning under and being integrated in the NATO missile defense system.  We continue to actively prepare the Warsaw NATO Summit and trust that it will mark progress by the Alliance also in this field of strategic importance for Romania, the United States, the European and NATO Allies unitarily, by the achievement of the objective of declaring the initial operational capability of the NATO missile defense system.

Romania demonstrates once more that it is a predictable actor and a trusted Ally that seriously carries through its commitments.  In this spirit we contribute to the increase in regional security by hosting the Multinational Division Southeast Headquarters and the NATO Force Integration Unit in Bucharest. Also, we honor the commitment made at the 2014 NATO Summit in Wales to increase the defense budget to 1.7% of GDP this year, in view of reaching 2% of GDP in 2017 and upholding this level for the next ten years.

Now, when we celebrate the realization of this important project, I wish to sincerely thank and congratulate all those who supported it and were directly or indirectly involved in it, political leaders, diplomats, members of the military and experts in designing, promoting and developing the Romania component of the missile defense system, in particular the Ministry of Foreign Affairs, the Ministry of National Defense and the Romanian Military, the other national security institutions and of course, last but not least, local authorities and community, who demonstrate the hospitality characteristic to the Romanian people.