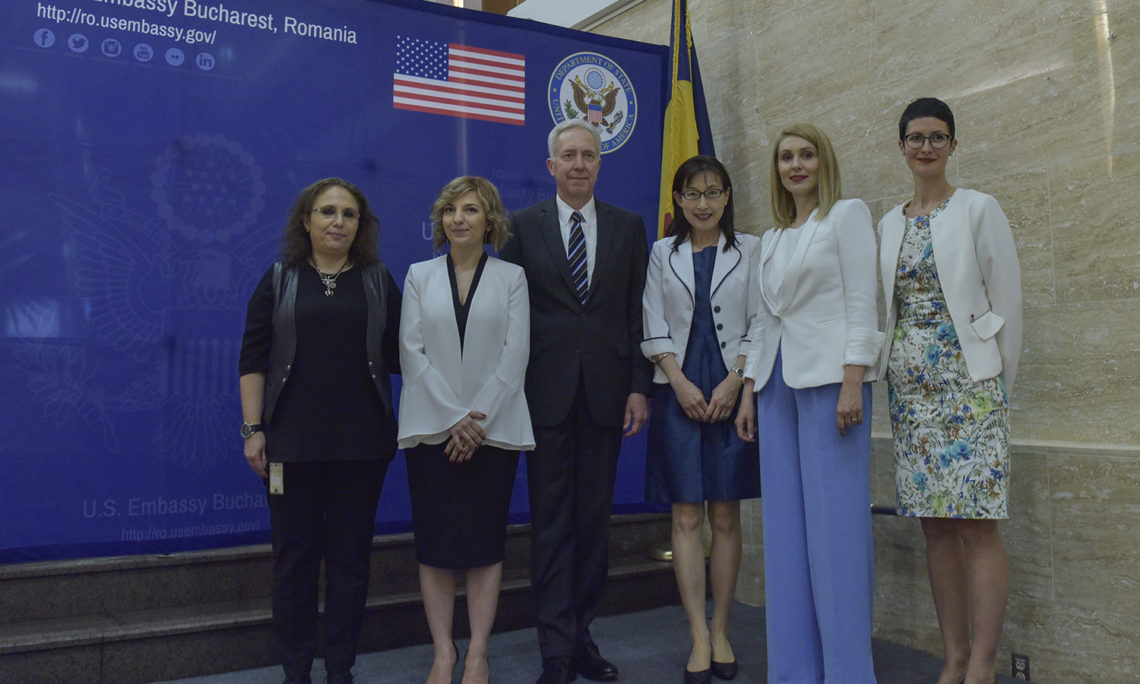 In 2007, the Department of State established the International Women of Courage Award to honor women who exemplified exceptional courage and leadership in advocating for human rights, women’s equality, and social progress – often at great personal risk.

Annually, each Embassy may nominate one candidate for the State Department’s International Women of Courage Award.  However, Romania has so many extraordinary women of courage. These women are strong, inspiring leaders who demonstrate unwavering commitment to their communities. So tonight the Embassy will recognize four Romanian women of courage in addition to our International Woman of Courage nominee for Romania for 2018.

Ambassador Hans Klemm at the International Women of Courage Ceremony

I will take a moment first to welcome all of you to the American Embassy this afternoon.
Your Excellencies, Presidential Counsellors, very distinguished guests, colleagues and friends,

Let me also give a particular shout out to a friend of mine, Dr. Maria Bucur, Professor of History and Gender Studies at Indiana University.  Dr. Bucur travelled all the way from the United States, in part to be with us.

I am delighted you could all join us today to celebrate five Romanian women who embody service, leadership, and, above all, courage.  While these women take on different issues facing Romania, they all serve as inspiring reminders of how determined individuals can make a difference and effect lasting change in their communities and across Romania.

With this in mind, I would like to say a few words about our principal honoree, Elena Alexandra Calistru.

Courage might be described as bearing up against intimidation and a prevalent sense of hopelessness to carry on with one’s duties.  Extraordinary courage is thriving in the face of intimidation and hopelessness, staying positive, staying creative, and spreading one’s positive attitude and creativity to others.  The latter is what Elena Calistru does every single day.  Elena has been the President of Funky Citizens since she co-founded the organization with her sister and a friend in May 2012. Funky Citizens brings an innovative and effective approach to increasing civic engagement in Romania, improving voter turnout, and supporting a more transparent democracy.

Funky Citizens uses online technology to engage and involve citizens in public life. To make complicated information, such as legislation, more accessible and understandable Funky Citizens provides tools for users to analyze information and engage with others.  Their tools aim to be educational and actionable, encouraging young citizens in particular to engage, to be part of government accountability initiatives.  By aggregating and educating youth around a series of digital platforms, Funky Citizens promotes public sector reform and builds a more participatory, responsible, and transparent democracy in Romania.

The concrete achievements of this young NGO are extraordinary:

Elena’s courage and dedication to improving her country comes with a significant level of pressure, yet she manages to maintain and transmit a positive attitude.  Elena is always the person in the room finding the bright side of the situation and conveying a message of hope.  And I have seen this in action several times.  The organization she leads has grown to four full-time and four-part time employees and over 40 volunteers.  Funky Citizens receives a significant portion of its funding from individuals making online donations.  These last two facts – 40 volunteers and significant personal donations, in a country where the vast majority of people view volunteering as a waste of time and supporting NGOs the job of the government or foreign donors – are perhaps the greatest testament to Calistru’s leadership and her organization’s credibility and unique capacity to create hope and civic engagement in Romania.

Our first award this afternoon goes to Ioana Albani.

A globally recognized expert and well-respected member of the judicial community, Chief Prosecutor Ioana Albani has been one of Romania’s key innovators in cybercrime investigative endeavors and has remained a dedicated promoter of transnational efforts to combat organized crime.  Mrs. Albani became Deputy Chief Prosecutor of the Directorate for Investigating Organized Crime and Terrorism Offences (DIICOT) in June 2016.  She was the Head of the Cyber Crime Unit within DIICOT for over 13 years, and previously she led the first specialized unit on cybercrime and money laundering within the former Section of the Romanian General Prosecutor’s Office. Throughout her career of over 20 years as prosecutor and trainer specialized in cybercrime investigatory procedures, Chief Prosecutor Albani has made significant contributions to a highly technical domain that requires an increased level of sophistication and expertise.  Her tireless efforts led not only to the creation of Romania’s first specialized prosecutorial team and to the adoption of the national legal framework against computer fraud, but also to the promotion of her country as a regional leader and disseminator of best practices in cybercrime operations across the world.

During her tenure at DIICOT, Chief Prosecutor Albani led Romanian law enforcement officers and prosecutors to successfully disrupt large scale Internet fraud and cybercrime cases.  Her role as an educator and mentor has encouraged generations of female investigators to engage in a field traditionally perceived as male-dominated and to make their voices heard by always adhering to the highest professional standards.  Chief Prosecutor Albani is a renowned advocate of cross-border and cross-disciplinary cooperation.  Her numerous public speaking engagements have shown her continued commitment to the fight against an ever-changing criminal landscape and her deep concern for preserving the safety and the prosperity of communities and businesses worldwide.

Our next award recipients are Daniela Staicu and Alina Tiplea.

Courage has many aspects.  Sometimes courage can mean finding a creative solution to a critical community need. Daniela Staicu and Alina Tiplea – the co-founders of MerciCharity, an NGO dedicated to providing basic dental care to impoverished children – are great examples of this multidimensional courage. A significant number of Romanian children never receive dental care of any kind.  Many will lose their teeth in early adulthood.  Others suffer from correctable but disfiguring conditions.  Alina and Daniela recognized this problem and, for several years now, have worked to build up MerciCharity, an association of volunteer dentists who travel throughout the countryside with a mobile dental lab providing free oral health checks, cleanings, and other services.  Through this work, they have helped to change the lives and futures of thousands of children, sparing them from a lifetime of pain, embarrassment, or stigma.  Yet, it has not been an easy project to undertake.

At every step along the way, these two brave women have faced indifference, hostility, and thinly-veiled misogyny. They have also felt the weight of social discrimination against the Roma, since much of their work takes place in
Roma communities.  Their challenges include fund-raising, recruiting volunteers, pursuing legislative fixes to allow the NGO to operate in this field, and overcoming a multitude of bureaucratic impediments.  Daniela and Alina speak up for the disenfranchised in the face of hate speech and derision for anyone with the audacity to stand up for social justice.  They have been ignored, patronized, harassed, shamed, but have doggedly pursued their vision to support communities in need.  As they progress the work of MerciCharity, Alina and Daniela’s refusal to be intimidated, bullied, or shut down is exemplary. Their unyielding courage as they persist in the fight for greater social justice and needed care in disenfranchised, minority communities is the mark of true grit.

Alina is away from Romania at present, but Daniela Staicu will receive the awards on both their behalf.

Our next award goes to Paula Felicia Rusu.

As a tuberculosis survivor with only one functioning lung, freelance journalist Paula Rusu has dedicated her life to activism and to raising public awareness about how the Romanian medical system must better address the issue of tuberculosis, or TB.  Paula previously had a successful journalism career, including as a TV anchor and producer.  Many prominent people avoid publicizing their TB-related problems, due to social stigma.  But at the risk of being unjustly criticized, Paula outed herself in social and traditional media to bravely embrace the deeply personal and important cause.

Her daily articles, interviews, blog posts, and public appearances act as a continuous, well-documented campaign, which urges authorities to fix problems involving TB in the health sector.  Romania is the EU country with the largest number of tuberculosis cases, accounting for one quarter of all TB cases in Europe.  European data shows that in 2016 there were 21,167 tuberculosis patients in Romania, which had the lowest cure rate in the EU.  The same data showed that 1,055 people died from TB in Romania in 2015 alone, and 12,790 new cases and relapses were recorded in Romania in 2016.  Past years’ health reports indicate that Romania has persistent TB drug shortages.  With most drugs for drug-resistant tuberculosis unavailable today to Romanian patients, Paula made a courageous decision – she put aside her career in journalism to fully embrace this cause.  Paula is currently working to have Parliament adopt a TB-dedicated law that would solve certain issues related to the poverty affecting TB-infected persons and contributing to the spread of the disease.  Paula has become a courageous ambassador for the many Romanians who are fighting this devastating disease and are unable to publically advocate for themselves.