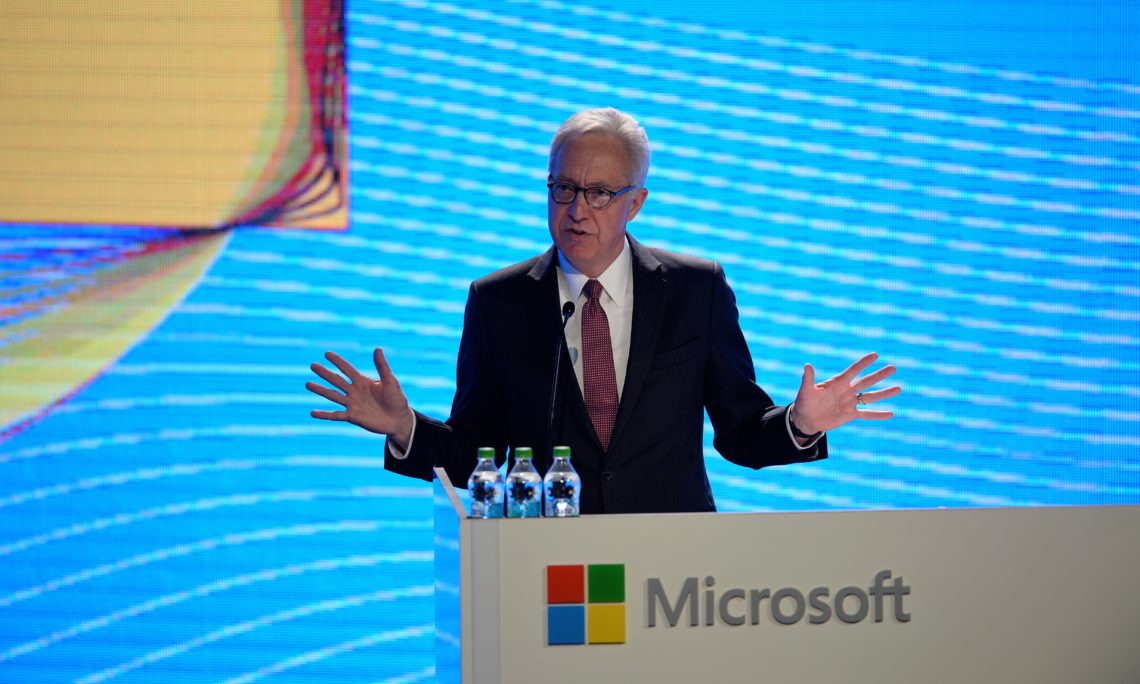 I am very proud to be here this morning at an event of one of the best, most innovative, solutions oriented companies in the world, an American company – Microsoft.

When I think of the digital economy and Romania, frankly I am left with some confusion. During my mission in Romania, I have been exposed to a Romania that works at the technological frontier. When we think, for example, of the extreme light infrastructure project in Magurele, which will be used to expand the understanding that we have of our physical universe, clearly operating at the high-tech frontier; also when I visit Romanian companies as well as American companies in energy, engineering, and manufacturing, there too, work is taking place at the technological frontier. Just one example, Ford Motor Company in Craiova – it is probably not well known that they build there the small engine that has been recognized by world standards as being the highest engineered, finest small engine in the world. And they have received that honor now for six consecutive years; when I visit Romanian universities, I see students engaged in robotics competitions, development of smart campuses and smart cities, and clearly there is a very strong spirit of innovation and entrepreneurship at faculties such as the Polytechnic in Bucharest, Babes-Bolyai in Cluj, in Timisoara, Iasi and elsewhere. Romania produces some of the finest STEM-educated students in the world and I’ve had direct contact with some of those students as I have interviewed them for acceptance to the most prestigious engineering and mathematics programs in the United States. And finally, the landscape here is populated by so many IT companies, American IT companies; they wouldn’t be here in the large scale that they are if it weren’t for the talent that exists in Romania. And then there is also the example of Romanian IT Company Bitdefender who has become very very successful in the area of cyber security.

But as we know there is also a great deal of Romania that still exists far from the technological frontier, exists still in, really, the 20th and even the 19th century with 30% of the population still engaged in agriculture and most of those engaged in subsistence agriculture.

This divergence in outcomes in Romania has been quantified. The European Commission annually puts together a study on the digital economy and society in each of the member countries of the European Union and publishes an index. What I would like to do is just explore this index and the results that have been published just recently, in September, for Romania. They looked at five different categories of our communications. One, connectivity. Here the story is mixed: on the one hand, Romanians enjoy the highest subscription rate for broadband in almost the entire European Union; on the other hand, the access to broadband and 4G mobile technology is far, far below the EU average. Looking at human capital, one in 40% Of Romanians never used the internet and some 70% of Romanians do not have even basic digital skills – again, the lowest of all European Union economies. Use of the internet, for example for e-commerce, for e-banking is very very low in Romania, while, however – and this won’t be a surprise for you here in the room – the use of social networks in Romania is very high. Business integration and business digitization is falling behind the European average. The use of the cloud has actually declined in recent years in Romania as has the turnover in e-commerce. And among SMEs who use the internet to engage in commerce across the border within the European Union, their ranking is the lowest in the European Union. Finally, the fifth category is e-government. Here, while there have been distinct improvements in both governments at the national and subnational levels, making data available to the public, e-government again is at the very bottom of the European Union and government service completion is also at the bottom.

The United States views this landscape as both an opportunity but also as a matter of concern. When looking at our trade agenda and viewing the opportunities that exist, we think they are substantial for American companies like Microsoft who are able to offer services to close the digital economy gap that exists in Romania.

But the United States is also interested in closing this gap because Romania is such a strong and good strategic partner of the United States. We want a Romania that is wealthier and stronger so that we can continue to work so positively together on so many fields. So what is the United States doing? Through the Romanian-American Foundation we are addressing education outcomes in Romania, both at the primary, secondary as well as the tertiary level. We recently launched a program that takes Romanian professors to a special course of studies in the United States at Rochester University to train them in teaching entrepreneurship and innovation. We have supported the first robotics competition in Romania and we’re also working – particularly in rural areas – to improve outcomes for students studying math and other science, technology and engineering programs. We’ve supported smart cities efforts and open government, and for the past two or three years, we have had a focus program of supporting innovation in entrepreneurship as well as trying to foster a startup culture in Romania, particularly in large cities like Bucharest, Timisoara, Iasi, and Cluj.

And then finally, in cybersecurity, as part of our Strategic Partnership with Romania, we have a special working group looking on how we can better partner on cybersecurity. We already enjoy very, very good cooperation across our law enforcement agencies, as well as our national security agencies in this effort.

One thing that the United States is not doing but that can be done here at the Microsoft Summit is to look at that fourth category, that is business digitization and IT integration, to help you increase the use of the cloud, to help you improve your ability to conduct business through e-commerce mechanisms and, for small and medium enterprises, those representatives in the room today, to help your ability to take up the digital economy. Also, Microsoft and you can make a positive impact on improving Romania’s use of e-government. This can be done both directly and indirectly, but certainly at a national and sub-national level, cities and county governments can be encouraged to do more work using e-government tools and as Gabriela mentioned, Microsoft has a great deal of products and services to offer to enhance your ability to improve your cybersecurity.

So I want to thank Microsoft for organizing and hosting today’s Microsoft Summit and I especially encourage Microsoft and your focus on finding innovative solutions in the digital economy, improving business performance by using digital tools, and improving for your customers and business-to-business clients digital services. Congratulations and I wish you great success today!