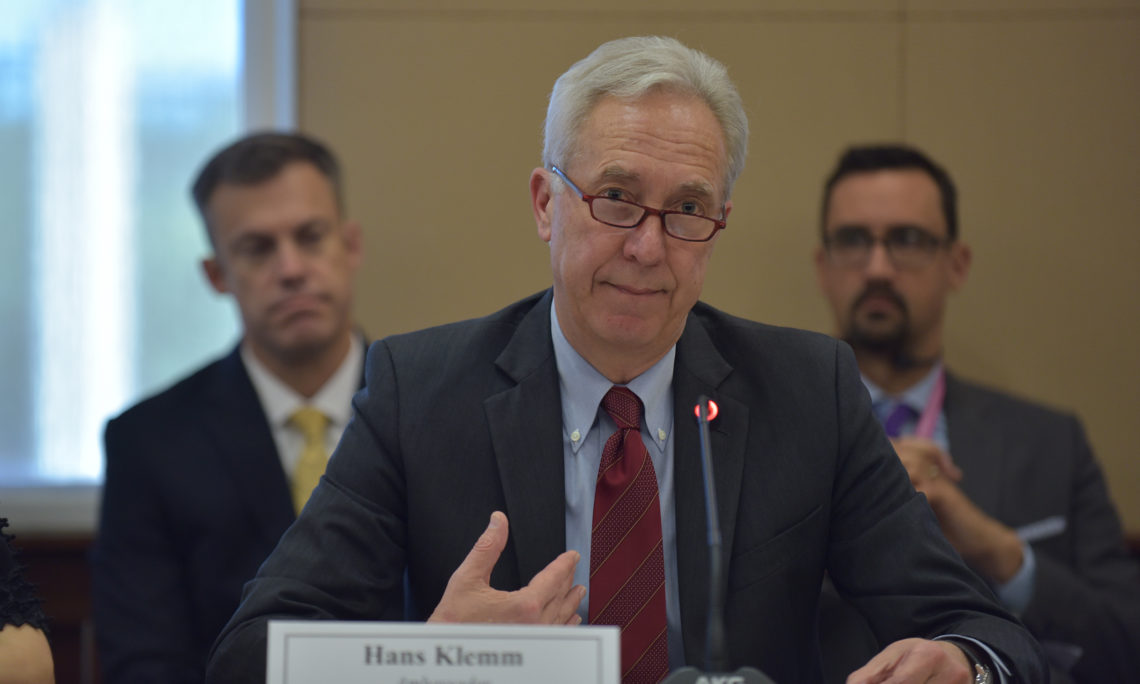 I just want to frame the task that we hope you will be able to put your arms around and wrestle to the ground during the course of the day. What I am about to say I think is probably pretty well known to you but hopefully again this context will be helpful.

Counterfeit and pirated goods are a significant threat to innovation. The continued demand for patents and trademarks underscores the ingenuity of inventors and entrepreneurs, but this edge is threatened by rampant theft of intellectual property.

Piracy and counterfeiting hurt those who own intellectual property rights and damage legitimate local producers, retailers, and distributors. They cannot compete with individuals manufacturing and selling pirated and counterfeit works.

Trends in illicit trade indicate a growing threat posed by foreign-produced counterfeit goods flowing to Europe. The OECD’s most recent study in 2016 estimated global trade in counterfeit items at US$461 billion annually, but the actual figure is likely much, much higher. This is money flowing away from Europe and United States largely to China and Chinese owned enterprises in Asia and even Europe.

Counterfeit goods not only undermine legitimate businesses, they have social effects as well, and often create substantial health and safety issues. For example:

• Counterfeit medicines can be deadly

• Counterfeit clothing can be flammable

• Counterfeit auto parts may not protect passengers from crashes

Cybercrime and IPR enforcement are major U.S. Government policy concerns. Criminal threats against computers and networked systems cause enormous harm to governments, business, and citizens, and pose a national security threat. A growing amount of illicit trade now has an online component, and Darknet markets remain a key, crosscutting enabler for other types of crime, providing access to, among other things, compromised financial data to commit various types of payment fraud, firearms, drugs, counterfeit documents to facilitate fraud, trafficking in human beings, and illegal immigration.

IP theft weakens personal privacy through identity theft and malicious software. Consumers who download illegal content put themselves at risk, because this “free” online, illegal content is often used as a Trojan horse, giving criminals access to consumers’ computers and personal information through malware, spyware, and ransomware hidden in the downloaded movie, song, or game.

Major cyber-attacks can lead to disastrous results from criminals hacking into critical systems and infrastructures, such as regional electric distribution companies, national railway systems, hospitals, pension funds, and government ministries, as well as from transforming innocent users’ computers into botnets.

Criminals also seek to steal valuable trade secrets, such as source code, exploiting vulnerabilities to include unlicensed or outdated/unpatched software (which a large part of the Romanian government is currently using). Oftentimes, vulnerabilities result from users downloading infected files through clicking on links to stream or view pirated content, or opening an email or a document attached to an email that promises to show the viewer infringing content. And this is a threat that has victims around the world, not only here in Romania or in Eastern Europe, but exactly what I just described happened at the Department of State in 2014 and it caused a computer infection that took nearly a year to finally identify and then cleanse, so this is a serious threat that can harm not only businesses, not only individuals, but governments, including national security agencies.

The U.S. has a strong interest – again, consistent with the National Security Strategy – to support development of a national IP strategy in Romania and to assist you to make sufficient progress to warrant consideration of Romania’s status in the annual Special 301 Report.

Please take this opportunity to conduct a frank assessment of the nature of the impediments to effective IPR enforcement in Romania, discuss approaches and practices that could be utilized to overcome these challenges, and to draft and implement a new national IP enforcement strategy to support innovation, economic development, and protect public health and safety and Romanian national security.

I want to thank you for being here this morning, for agreeing to commit your valuable time and effort to this project of developing a national intellectual property strategy. We think it’s an important thing to do, it’s the right thing to do, and we very much want to support and assist in any way we can. Please know that of my priorities, encouraging the further collaboration between U.S. law enforcement and Romanian law enforcement is the very highest. Already we enjoy with our Romanian law enforcement partners, prosecutors, police, exceptional cooperation and collaboration. One signal of that success is when you look at this embassy and the offices within this building that are expanding, it’s precisely those offices that support cooperation and collaboration with Romanian prosecutors and law enforcement.

I thank Mrs. Pop for first of all being here. She is part of that growth that we’ve witnessed over the past several years, but also her commitment to work with you to improve Romania’s protection of intellectual property. So thank you very much.