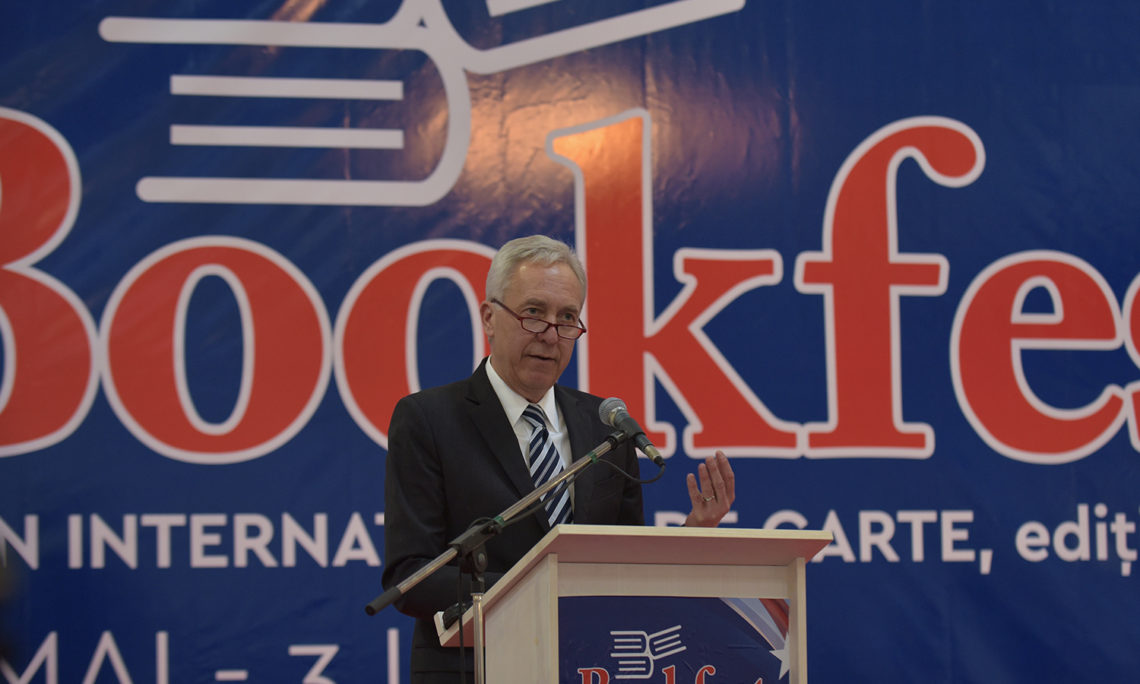 Books – they are vessels of delight, enchantment, knowledge, science, wisdom, tragedy, comedy, and sometimes boredom. Books are central to our Western civilization. They were the engine of the Renaissance, contributed vastly to the Enlightenment and to the tremendous material progress that we have made in our modern age. They enabled the propagation of faith, but also conveyed harmful ideologies. Books were core to the education of our great leaders, whether in politics, science or the arts. Two examples:

In America, perhaps our greatest President, Abraham Lincoln, was a voracious reader of legal text, largely a self-taught lawyer, but also of the classics — Roman and Greek – of the Bible, and writers ranging from Homer to Shakespeare. Lincoln said: “The things I want to know are in books, so my best friend is a man who will get me a book I have not yet read.”

And then the second example here in Romania, 100 years after Lincoln, the great playright Mihail Sebastian, who despite being a very prolific writer and living in very turbulent times, devoured books. Reading his journals, I am always astonished by his reading list – Austen, Balzac, again the Bible, Conrad, Ibsen, La Fontaine, Marx, Montaigne, Proust, again Shakespeare, Tolstoy, and many, many others.

As Ambassador to Romania, I am often reminded of the role the U.S. Embassy and our library and Cultural Center played in the cultural and literary life of Bucharest, especially in the Communist era. After arriving in Bucharest, I was encouraged by many to consider how the United States might again play a similar role as we did in the 1960s, 70s, and 80s. I took this encouragement seriously, so I am very proud that the United States of America is this year’s Bookfest country guest of honor.

We have chosen to highlight several American writers, some of whose works have been influenced by the southern United States. This part of the United States is rich in culture and history, some of it not so pleasant, but stories from the South serve not only as reminders of this history, but provide insights into issues we face today. We are proud to sponsor at the festival:

Domnica Radulescu, born in Bucharest, who is the Distinguished Professor of Comparative literature at Washington and Lee University in Lexington, Virginia. Domnica is an award-winning novelist, playwright, and two-time Fulbright scholar to Romania.

Sarah Kennedy is a professor of English at Mary Baldwin University in Stunton, Virginia and has written historical novels and poetry which reflect on her personal experiences.

Tara Skurtu is an American poet and translator who now lives in Romania. Also a former Fulbright scholar, she has won numerous awards and recognition for her poetry.

Sucheta Rawal, born in India, now lives and writes in the state of Georgia. She has written a number of books on cooking, but is perhaps best known for her children’s series, Beato Goes To, books which highlight the cat Beato traveling to different corners of the world and his experiences with cultures around the world. Next year, Beato is scheduled to travel and write about his experiences in Romania.

In closing, Mr. President, we wish to note our sincere gratitude for the efforts of President Arsene and his team for putting together what has become one of Romania’s annual premier cultural events.

Thank you for your patience and attention.