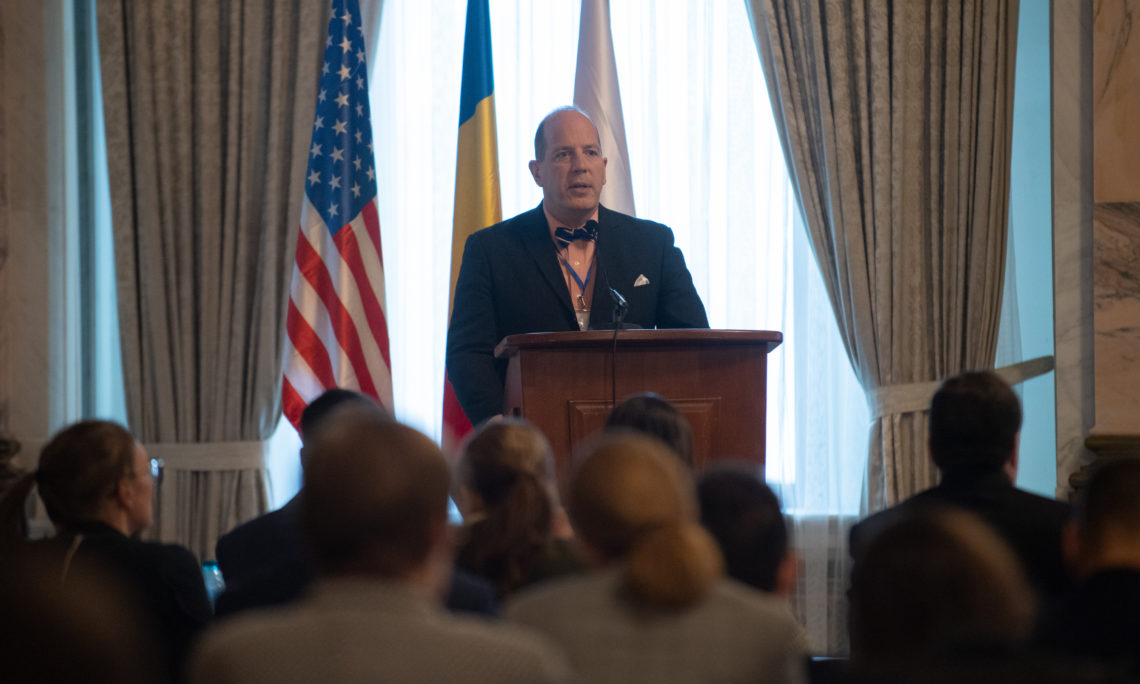 Good morning, everyone.  On behalf of the United States, I would like to thank our gracious Romanian hosts who have allowed us to meet here in this fantastic venue, and also the Polish government for its continuing leadership in the aptly named Warsaw Process. And I should also thank all of you, who have taken the time to come here for these important discussions. We are very pleased to be participating in this working group meeting on missile proliferation, which builds upon the foundation created by the February 2019 Warsaw Ministerial to Promote Peace and Security in the Middle East in examining the pressing challenges facing that region and affecting broader international security.

As no student of history would be able to overlook, the proliferation of missile technology can exert a powerfully destabilizing effect upon pre-existing military and geopolitical relationships.  Rocket-powered projectiles, including with explosive warheads, were of course used in warfare for centuries before the modern era.  But such devices really came into their own as a powerful and potentially transformative military tool only in much more recent years, and with this emergence has come our present-day challenges of managing missile proliferation.

Infamously, air-breathing cruise missiles actually came first – with early ballistic missiles following close on their heels – as innovative vengeance weapons developed by Hitler’s Third Reich late in the Second World War, specifically in order to terrorize civilian populations and upend the course of a war that had turned decisively against the Nazis.  Thankfully, that effort failed, but the ideas and technologies pioneered there helped catalyze and form the basis of both postwar superpowers’ subsequent arms race in long-range ballistic missiles, now armed with nuclear warheads.

Today, technological change has made missiles both more capable and more widespread than ever.  In Hitler’s day, the potential role of long-range missiles was limited by the fact that only conventional warheads were available and that missile accuracy was quite poor; they represented an important leap in technological development, but were never the transformative tool for which their Nazi designers hoped.  Now, however, missiles are capable not only of delivering various types of weapons of mass destruction (WMD), but also of delivering conventional payloads with extraordinary accuracy and in ways that are challenging to defend against even while avoiding the costs and risks of putting pilots in harms’ way.  Making matters worse, these weapons are easier to make than ever, with production technology being increasingly spread around the world – including to non-state actors.

Injecting these dangerous tools into existing regional problems through missile proliferation adds volatility, catalyzes arms race behavior that is both expensive and dangerously escalatory, and runs the risk of provoking wider conflict.  Missiles that can rapidly strike targets increasingly far away, cannot be recalled once launched, and are very likely to arrive unscathed at their intended aimpoints add kindling to already worrying regional dynamics and thus present significant regional security and stability problems.  Their ability to deliver WMD or conventional payloads equally easily merely heightens these challenges.

The destabilizing effects of missile proliferation are particularly evident in the Middle East, where we continue to witness the spread of advanced missile capabilities to states, and, increasingly, to non-state actors.  Thanks to missile cooperation by various states outside the region over many years, and an ongoing flow of items and material from certain outside points of origin – as well as to the steady development and indigenization of production and manufacturing capabilities – the Middle East is experiencing a dangerous and destabilizing missile race.

An obvious example of this problem is Iran, which possesses the largest missile program in the Middle East and continues to work aggressively to increase the size, sophistication, and accuracy of its missile arsenal – developments that are encouraging other regional players to invest in their own missiles, both indigenously and procured from outside the region.  Nor is this growing regional problem just about states building up capabilities in ever more dangerous regional rivalries.  In recent years, such missiles have also spread to non-state actors, and they have also increasingly been used.  Examples in recent years include the acquisition and firing of ballistic missiles by Houthi forces in Yemen, the Syrian regime’s widespread use of ballistic missiles against opposition forces, Hizballah’s pursuit of its own missile production facilities in Lebanon, and the recent Iranian attacks using cruise missiles and unmanned aerial vehicles (UAVs) against critical infrastructure in Saudi Arabia.

Halting the further proliferation of ballistic missile systems and technologies in order to short-circuit this growing source of regional instability will not be easy, but it surely won’t happen at all unless we become more effective in working together and using our diplomacy to raise awareness of the current missile proliferation threat and promote steps that states can take to combat it.

Such engagement is needed with those states where key suppliers of sensitive technology are located – and especially in demanding restraint from countries that unconscionably continue to permit items and material, or even missiles themselves, to be shipped into the region. It is also needed with transshipment and transit states that serve as nodes for proliferation shipments ultimately destined for end-users of concern.  We must also cooperate more effectively to prevent – and, where needed, to penalize – the provision of missile capabilities to non-state actors.

Bolstering missile nonproliferation efforts also requires states to set an example through their own national policies and actions.  In particular, all governments should enact effective national controls on transfers from their territory of equipment and technology that can be used in WMD-capable delivery systems, consistent with the requirements of U.N. Security Council Resolution 1540.

In parallel, states should support transparency and confidence building measures that reinforce international norms discouraging missile proliferation.  One major example in this regard that will be discussed today is the Hague Code of Conduct Against Ballistic Missile Proliferation (HCOC).  States should be clear about what constitute standards of responsible behavior in preventing missile proliferation, should be unstinting in support for adherence to such standards, and must be willing to call out those who act irresponsibly.

By taking these and other appropriate steps, states can make important contributions to limiting the spread of dangerous and destabilizing missile capabilities.  This conference can be a starting point for us all as we work to try to turn these troubling regional dynamics around, so I thank you for attending and I look forward to your contributions.