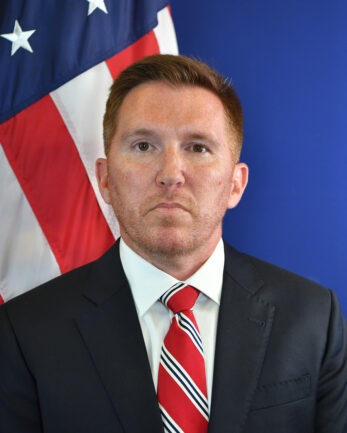 Shane Dixon became the Acting Deputy Chief of Mission in June 2021. Shane is a Supervisory Special Agent and arrived in Bucharest March 2020 to serve as the Regional Security Officer. He joined the Foreign Service in 2006. His previous tours include RSO Karachi, Pakistan; RSO Ciudad Juarez, Mexico; ARSO Lusaka, Zambia; ARSO Abidjan, Cote d’Ivoire; as well as a tour in both Diplomatic Security’s International Programs and the Los Angeles Field Office.

Shane grew up in Gladeville, Tennessee. He has an undergraduate degree from Tennessee Tech University and a graduate degree from the National Intelligence University. Shane speaks Spanish and Romanian and has limited proficiency in French. He is part of a tandem couple, his partner Amanda is a Consular coned generalist. Shane is an avid outdoorsman and enjoys mountaineering and diving.