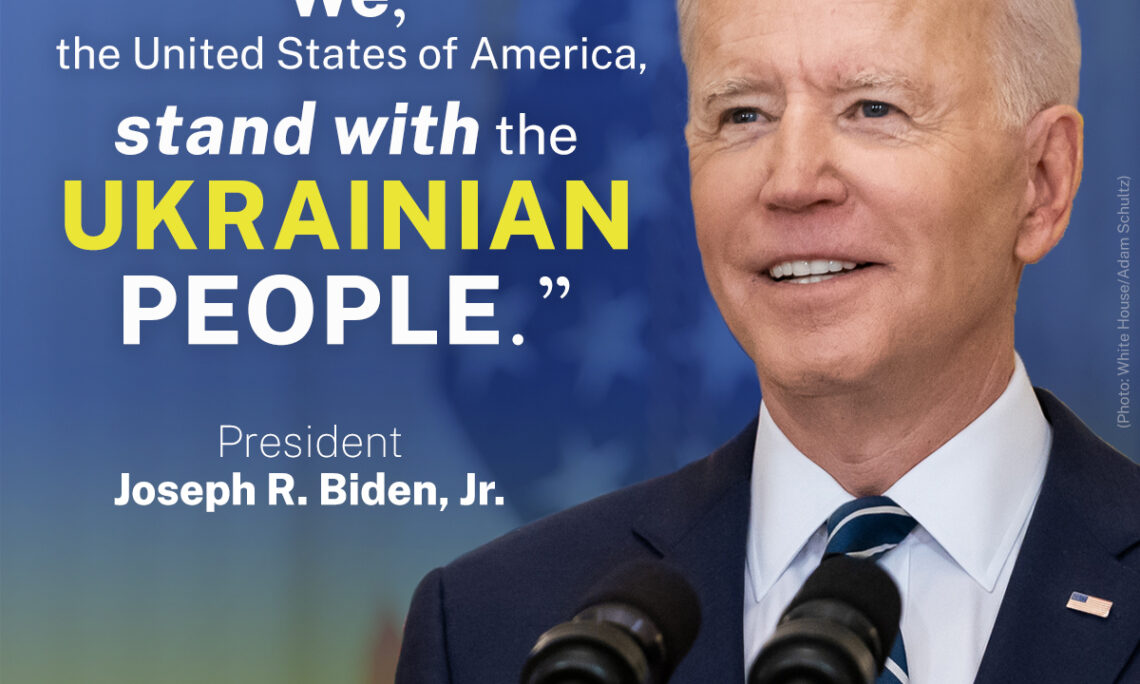 “We, the United States of America, stand with the Ukrainian people.” President Joseph R. Biden, Jr.

It is a defining moment for Europe, for freedom, and for all peace-loving nations and peoples. Through his criminal assault on the people and sovereignty of Ukraine, Vladimir Putin has also brutalized the principles that undergird global peace and democracy. But Ukrainians are known for their resilience and bravery, and they are now inspiring the world. The United States, together with our Allies and partners around the globe, will continue to support them as they defend their country. Freedom will prevail.

In choosing to finance an illegal war rather than investing in the needs of his people, Putin’s invasion will forever define strategic failure for Moscow and nadir of modern care for the Russian people. When the history of this era is written, it will show that his choice to launch an unjust and premeditated attack shattered the peace and served only to strengthen the unity among, and resolve of, every freedom loving democratic nation.

This barbarity will not end well for Vladimir Putin. Together, the United States and our Allies and partners are taking action to hold him and Russia accountable. As a result of unprecedented global sanctions coordination, the United States, the United Kingdom, the European Union, Japan, and Canada have removed selected Russian banks from the SWIFT messaging system and imposed restrictive measures on the Russian Central Bank. President Biden announced sweeping financial sanctions and harsh export controls that will damage Russia’s economy, financial system, and access to technology. Putin will be remembered as the despot who caused an unprecedented plummet in his nation’s currency and markets. And we and our allies are ensuring that he and his cabal personally feel the impact of every sanction and measured imposed.

In conjunction with an unrivaled coalition of Allies and partners—together

These economic penalties are harsh, unprecedented, and entirely warranted. They also parallel President Biden’s recent authorization of an additional $350 million in security assistance. This brings America’s total security assistance to Ukraine over the past year to over $1 billion. Recent events have shown just how effective this assistance is, when it is placed in the right hands. America also, as always, stands ready to defend our NATO Allies. President Biden has coordinated with Allied governments to position thousands of additional forces in Germany and Poland as part of our commitment to NATO’s collective defense. He authorized the deployment of ground and air forces already stationed in Europe to NATO’s eastern and southeastern flanks, including here in

Romania, as well as in Estonia, Latvia, Lithuania, Poland. Our Allies have also added their own very formidable forces and capabilities to ensure an incredible collective defense. There should be no doubt about the readiness of the greatest military Alliance in the history of the world.

The evidence is in – this attack had been long planned. Putin deceitfully readied his forces, both regular, and mercenary to savage Ukraine, all while lying about seeking peace. He rejected every good-faith effort by the United States and our Allies and partners to address his fabricated security concerns and to avoid this entirely needless war. His bellicose plans unfolded exactly as we warned the world they would—his playbook was hardly different than when he initially attacked Ukraine in 2014 or Georgia in 2008. The United States was transparent with the world. We declassified our intelligence about Russia’s plans so there would be no confusion.

Putin failed to divide our Alliance and the friendly nations of the world. Our shared love for democratic values and peace are far stronger than he was capable of understanding or appreciating. Such is the curse of the autocrat and the despot. The United States, Romania, and our Allies now stand shoulder-to-shoulder in the face of the most significant challenge to European security and democratic ideals our world has seen in decades. This invasion will fail, and Ukraine will stand. Putin and his lackeys succeeded only in strengthening our resolve, bringing NATO closer, and showing the absolute best of our peoples. The baseless threats he issues are signs of his weakness and the Alliance’s strength.

As of this writing, Romania has aided well over tens-of-thousands of refugees fleeing Ukraine, and this number grows by the minute. International media has taken note, and the world will long remember the kindness and care the Romanians and their government showed their neighbors. From aid stations, and medical care, to first responders, the official response has been amazing, and the from-the-heart response of the Romanian citizenry has been profound. The United States has long been proud to call this nation and its citizens our friends and Allies. But even we were amazed at the outpouring of care for a neighbor. Offers of housing, food, items of daily necessity, and transportation to Bucharest and beyond have come flooding in from the Romanian public. The charity has been genuine and staggering in its proportions. Clearly, Putin’s misguided despotic dog-whistle to European nations to turn on their neighbor shows how very little he understands of the decency, law, respect, that define what Romania is, and who we all are.