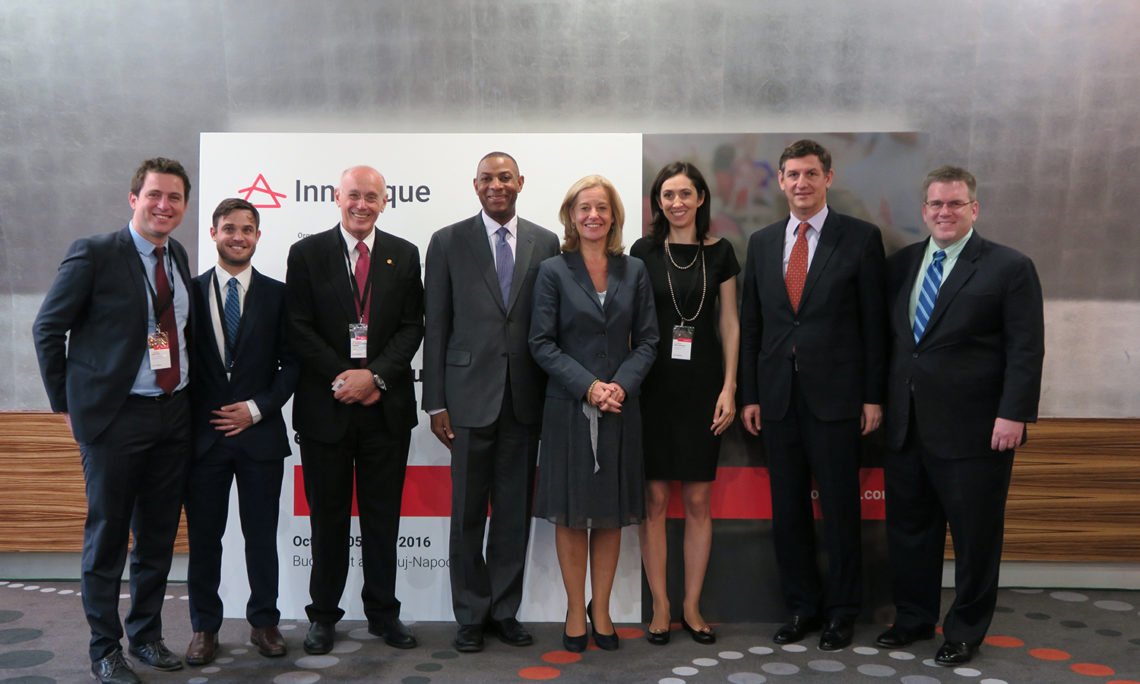 It is really a great opportunity to be here today and I want to open by offering Ambassador Klemm’s regrets that he couldn’t be with you this morning to the opening due to some changes in his travel plans, but he will be back this afternoon and joining you for other parts of the conference as you move on this week. He has been a huge supporter of efforts like this, trying to help through out partnerships to build a more innovative society in Romania and I think this is a great example of the kind of effort that comes from that desire.

I do also want to also thank Andrei and Oana for all their hard work in putting this together and a tremendous partnership with yourselves and your organizations and it really is a testament to your commitment to the future of Romania with everything you’ve done and with the success you’ve had in gathering such a large group of people to talk about this important issue.

Also, again to note that it’s a real honor to be partnering with the Netherlands and Israel.

Israel has of course a proven track record as an innovation leader, and indeed is known throughout the world now as the “innovation nation”, which is a wonderful marker I think as you go around and look at your nation’s future.

Of course, the Netherlands is driving innovation on many fronts within the EU, joining other partner countries like Denmark, Finland, Germany, and Sweden as an EU Innovation Leader, as identified by the European Commission’s 2016 Innovation Scorecard as Ambassador Ronner just discussed.

I want to talk just a little bit this morning first about the relationship between the United States and Romania with regard to their commercial and economic ties. They are very robust.  In fact, two of our very well known companies Exxon and Ford have invested over a billion dollars each here in recent years.  And if you look at the official statistics that are out there, the United States would appear to be only the 12th-13th largest source of Foreign Direct Investment.  But if you look at the iconic U.S. brands present in the market and you look at how their structures are put together because of taxes or other reasons, I think you’ll find that if we take the brands themselves, the U.S. is easily in the top three of foreign investors in Romania.  This is something that we’re proud of and something we want to build on further now.

Now, you may be asking: why are you talking about foreign investment in the opening to a conference on innovation.  And the reason is because we think U.S. firms have a distinct and important role to play helping to foster innovation in Romania and we believe that the partnership that we’re forging on those fronts are going to be critical in the years ahead.  Just last week we had the fifth round of the U.S.-Romania Strategic Partnership Dialogue in Washington and the second half of the program was hosted actually at our trade ministry, the Department of Commerce – and we had a tremendous set of discussions with regard to the types of issues that we usually take up going forward in trying to build a closer and more robust trade investment relationship between our countries.

One of the traits I think is intrical to how we Americans look at ourselves is that we like to think we don’t just sit idly by.  We are always striving to make things a little better, to carry a position or a project forward and the truth is it is actually an idea that is enshrined in our Constitution.  Our Founding Fathers said that we would always strive to make a more perfect Union, that we would not be satisfied at any point in time; the point we’re satistified is when we need to get up and start doing something new.  So it is important from an innovation standpoint to recognize that America has fared very well in rankings and seen as a contributor overall to innovation around the world.  So we go to continue that kind of tradition through our support for conferences like today.

Now I am going to refer to some notes more fully now because my team put together I think some really good ideas that I hope will stimulate some discussion as we go forward.  And one of the questions that was put when we were putting together this conference is:

So what is Innovation?  Put simply, a very simple answer we found it is that it is the future delivered.  That definition is not mine or ours, but rather came from an innovation consultant Jorge Barba. It is an interesting way to look at innovation because it takes on a specific challenge and makes the solution part of the future.  Barba also said that leaders must provide six things to employees to effectively innovate:  freedom, resources, diverse teams, support, encouragement and a challenge.  And, the same applies to countries; the same applies to Romania.

This conference will identify many of the barriers that Romania faces to fully spark innovation, but the pieces are all here.  Many companies that I have visited, that have chosen to locate in Romania, recognize that all these pieces are in place and they are building successful enterprises here by providing their Romanian employees with freedom, with resources, diverse teams, support and encouragement and with difficult challenges to solve – and these companies are getting results.

So how do we move from innovative companies getting results here, to fostering an innovative country where more and more Romanian entrepreneurs and start-ups can flourish and grow?  I look forward to hearing the diverse opinions that will be offered by conference participants, including our own Dr. Winslow Sargeant, former Director of the Small Business Administration in the United States, venture capitalist and someone who, I think, will have a lot of ideas to share about the U.S. model for you today.

But we want to find a way to inspire in the public and private sectors that they should set ambitious goals that create the challenges that the country strives towards; the public sector should create a public framework that enables the freedom, resources, and Romania’s diversity to be targeted at the challenges and then encourage the market to reward people for working to deliver their own future.  So today I call on the Romanian leadership to ask yourselves, how are we prompting and enabling innovation, what impediments should we dispatch in order to deliver the future that we desire?  Work to provide the freedom, the resources, the diversity, the support, the encouragement, and the challenges in front of your people; and then, step back, and watch Innovative Romania take root.  So I want thank everybody again for your participation in the conference today.   We look forward to an interesting program, to stimulating discussion and the emergence of powerful ideas to shape the way forward for Romania’s future.