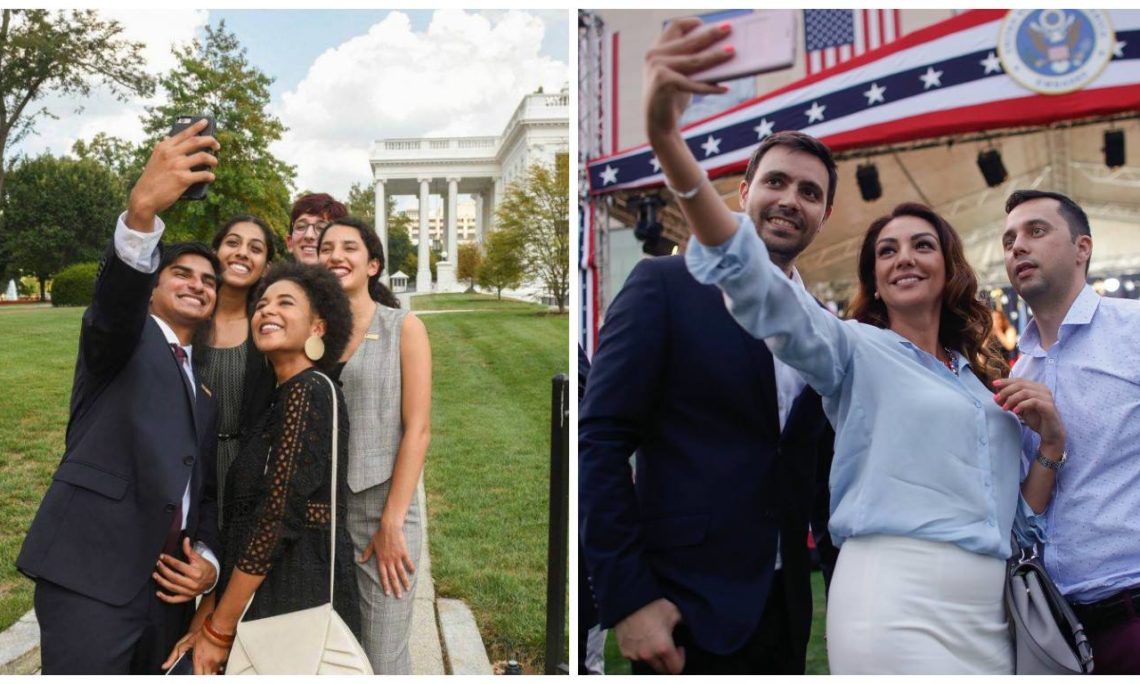 ‘I wish I were more courageous, more confident in my own abilities and more self-reliant. I wish I could travel to new places, meet new people and learn about different cultures.’ These words were constantly running through my mind in the summer of 2010. Little did I know that once I embarked on a journey across the Atlantic Ocean, I would make my dreams and wishes a reality.

Being outside of my comfort zone and traveling all by myself (to beautiful Glacier National Park, Montana) were the best ‘teachers’ I ever had. The Work & Travel experience taught me to be more tolerant and accepting of people who are completely different than me, helped me become more responsible and mature and made me a better person in general.

The USA turned out to be so much more than what I knew from movies, TV shows, cartoons, books and what other people told me about it. Some of the things that have made a strong and lasting impression on me from my American experience are the following:

– No matter where you’re from and what color your skin has, you can definitely get along with people who are extremely different than you and coexist peacefully, as long as you are tolerant, practice empathy and are respectful of one another. Romanians, Americans, Ukrainians, Chinese, we all learned to live together under the same roof and although we sometimes had some tensions to overcome, we managed to put aside our differences and work, live and have fun together.

– Americans smile a lot and although sometimes it may seem superficial, most of the time they genuinely feel happy and want you to feel welcome. This also says a lot about who they are as a people and the positive energy they want to spread in the world. I wish more people would realize just how important it is to be nice and would smile more often. I sure do. J

– People are the same wherever you go because good and bad exist in all of us. I was lucky enough to get to know mostly good people who helped me adapt to a new environment and a different culture. So many Americans invited me into their houses, into their lives and showed me what true generosity and hospitality feel like.

BBQs, bonfires, parties, rafting, hiking, dancing nights, trivia nights are just a few examples of the things that made my experience in the US unforgettable. I feel thankful and blessed to call some of the people I met there my friends and I will forever cherish our moments together.

Applying to this cultural exchange program has been one of the best decisions I’ve ever made in my life because it shaped the way I am today and enriched my life in ways I didn’t even think possible.

My first experience with Work and Travel was probably the best thing that could ever happen to me. Being 18 years old and traveling on the rim of the world is not easy for anyone unless you have a strong will and curiosity of discovering the American continent, new places, new cultures and new FRIENDS.

The first thing that you see when entering in The U.S.A is diversity, people who work together, who play together and love each other no matter what race, color, religion, sexuality they are. This is actually the most important thing that I learnt while in America: to love more and judge less.

The very second thing that I did not expect and happened was that I made friends starting with day 1, these friends have actually become my second family. We had great times together, I discovered new cultures, their habits and their cuisine as each week one of us had to make a traditional dinner and invite over the others. And what is the most important, we are still friends after we came back from The U.S.A, this is how I got to visit Ukraine to see the girl I shared my room with.

After months of working, we were able to travel all over the American continent and so I chose New York City. I will never forget the feeling that I got when the pilot said: “Ladies and gentlemen, welcome to The Big Apple”.

I have seen NYC in movies many times, but nothing compares to the feeling of actually being there, gazing at the The Empire State Building, walking on 5th Avenue and feeling like Carry Bradshaw in Sex and The City, wandering on Brooklyn Bridge and getting lost on the streets of Manhattan. I could not find any word to describe how I felt while being there. Everything is above your expectations.

If someone asks me what Work and Travel meant to me, my answer is simple: A freedom lesson held by America, a life lesson that allowed me to make friends, see places and most important discover cultures from more than 20 countries. Long live America!

It was summer back then; I was 20 and lived my dream.It wasn’t just the American Dream; it was my favourite summer story. I got off from the plane scared and excited, with a bag full of emotions.In four months, USA became my home away from home, where I got out from my comfort zone, I experienced a new culture, I laughed from the bottom of my heart with strangers that turned into friends, I saw the world from 1,353 feet in the air, I experienced the thrill of a helicopter ride and I learned that summer is too short to have regrets. I came back with the bag full of memories, feelings and moments. I expected to like but I love it so I decided to go back last summer, to see again the people with which I made Skype calls too many times, shared too many songs and sent too many postcards. In America I found the summers of my heart: I lived, I travelled, I felt and I can say that these experiences are all about the stories I wrote with the people that I met in the places that I saw.

It’s hard to find words when it’s about my summer in USA. I still remember my reaction when I have arrived in Chicago „Oh my God, is exactly like in the movies!”

My summer experience in USA was above living the „American Dream”. Was about hard working, meeting different types of people from around the world, was about multiculturalism, friends and respect.

As a cultural shock was the fact that I didn’t see it before such patriotism and appurtenance for a country or for the place where someone is living in. It’s just amazing how many different cultures from a small village to big cities are making together America such a great country.

I wish to see everywhere in the world the attitude regarding customer service and the way that families are celebrating each feast in such a fun way.

Do I have regrets? Normally no, but regarding the work and travel program I do regret that fact that I went there just two times.

But I am very happy that I convinced many friends and students to participate and each of them feels like their lives are changed after a work and travel summer.

There are experiences in life responsible for how you decide to live the rest of your life.

I will admit, if I wouldn’t have travelled and lived abroad, I would probably be half of the person I am today.

I am happy, proud, confident, open-minded and motivated. I’ve made friends for life with people from all over the world. And as we go on in life, we will always remember all the good times we had together. I had the opportunity to see the United States from the very hot and humid South to the very North with the beautiful Niagara Falls and from the Atlantic to the Pacific Ocean. I found the theme park I worked for so amazing that it inspired me to write my dissertation paper about it.

I didn’t expect people to be so friendly and smiling. This helped me to embrace all that was new and different.

I am part of a lucky generation. We can make a difference and become members of a society where respecting other cultures is a sign of maturity, learning from other cultures is a way to become better people and living experiences outside our comfort zone actually means living.