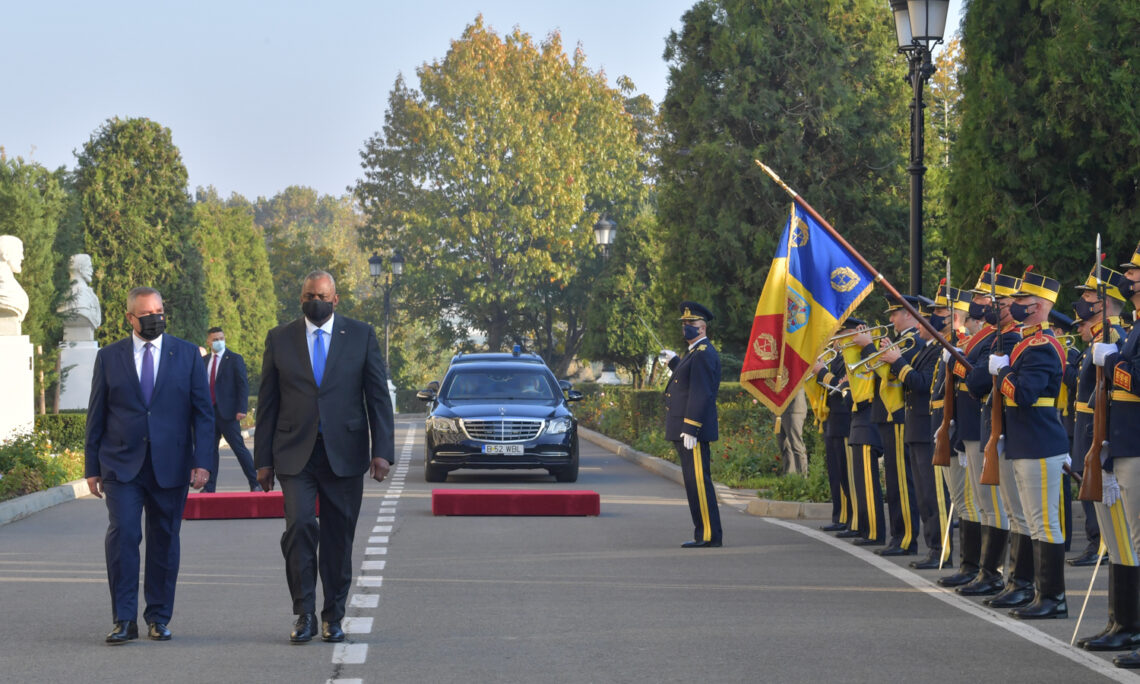 Good morning, everyone. It’s great to be here. It is a lovely day!

Let me start by thanking the people of Romania for your warm hospitality.

And Mr. Minister, thank you for hosting me on my very first visit to Romania as Secretary of Defense.

Now, the Minister and I just had a very productive discussion on a range of issues.

And we’re building on a relationship that’s based on mutual trust, respect, and the political will to advance our common defense objectives.

As President Biden affirmed at the Bucharest Nine Summit in May, this Administration is committed to strengthening our Euro-Atlantic bonds and to ensuring a secure Eastern Flank.

So, I very much wanted to come to Romania ahead of the NATO Defense Ministers meetings.

Romania sets an important example for Allied commitment on sharing responsibility, defense modernization, and contributing to NATO missions in Europe and beyond.

I also wanted to be here to honor the Romanian service members who served side by side with us in Afghanistan over the past 20 years… including the 27 Romanian troops who died in Afghanistan.

And Mr. Minister I offer a personal note of thanks to you for serving in both Afghanistan and Iraq. I think you set a sterling example of selfless service for others to emulate.

As a veteran of the Afghan war, I’m especially grateful for all that you’ve done, and my thoughts are with those fallen warriors and their families.

Now, as most of you know, Romania is one of a handful of NATO Allies that hosts a significant number of U.S. rotational forces, and we are enormously grateful for your support and your commitment.

Later today, I’ll get a chance to visit our forces at MK Air Base… and see first-hand the outstanding relationship between our two militaries.

Now, this year marks a decade since we signed the Strategic Partnership Joint Declaration and the Ballistic Missile-Defense Agreement.

It also marks five years since we established Europe’s first and only operational Aegis Ashore site in Romania.

When it comes to defense, Romania has made great strides.

It has replaced its older military equipment. It has focused its efforts on NATO interoperability.

And it has strengthened its defense institutions and military infrastructure, while bolstering its cyber defenses and deepening intelligence cooperation.

All these themes are captured in the 10-year Roadmap for Defense Cooperation that we signed last year.

And Mr. Minister, I look forward to working with you to further implement this plan.

Now, we also spent some time today discussing the importance of deepening cooperation among our Black Sea Allies and partners to deter and defend against Russian malign activities in the region.

As I mentioned during my visit to Kyiv, the United States will continue to provide assistance to enhance the maritime capabilities of Romania, Bulgaria, Ukraine, and Georgia in support of these efforts.

I’d also like to acknowledge Romania’s leadership in the region in securing its critical infrastructure against malign actors… especially your 5G security law, which not only protects Romania but strengthens our collective defense.

Mr. Minister, it’s great to get to visit in person.

And I’m looking forward to seeing you, as well as our other NATO colleagues, in Brussels for our first in-person NATO Defense Ministerial since the start of the pandemic.

Thanks again, Sir, for your hospitality. And so, with that, we’ll take some questions.

Question from Adelin Petrisor, Romanian Public TV: Secretary, in the last few years, the United States Government invested a lot in at least two big airbases in Romania. Will the United States increase its military presence here in the near future, sir? Thank you.

Secretary Austin: As you know, we are currently looking at our force posture and where our resources are deployed around the globe. I think our posture in the region continues to present a credible threat against Russia and it enables NATO forces to operate more effectively should deterrence fail. And I think this is borne out of our commitment to sustaining a rotational U.S. force presence. We continue to have about 1,000 rotational forces in Romania, including heavy infantry, rotary assets, enablers, and as you heard me mention earlier, Europe’s first and only operational Aegis Ashore. I don’t have any announcements to make today. I will just say that we all surge more U.S. forces into the country from time to time to participate in exercises and you can look to see those kinds of activities continued. Thank you.

Question from Paul Handley, AFP: Minister Ciuca, you spoke of the Black Sea as a critical region and of course, that’s the major topic of the Secretary’s visit. That means cooperating more with Georgia and Ukraine. Would you favor Georgia and Ukraine becoming full members of NATO to advance the Black Sea Initiative? Secretary, to follow up on the last question, could you say yes or no, whether there is a permanent U.S. base envisioned for Romania?

Minister Ciuca: Thank you, sir, I will answer by saying that so far we have analyzed and also discussed all the security aspects in the Black Sea region and also we discussed all the developments we can approach bilaterally, as we discussed today with Secretary Austin. Also, we have to consider all the major within NATO. Looking specifically to what we can do, based on the decisions taken within the Alliance, I’ll say that Romania is doing its best to consolidate its own defense capability and also, it’s doing its best to support our partners from the Black Sea area. So, all the NATO exercises, all the bilateral exercises, with Ukraine, Georgia and the Republic of Moldova are designated to support them, to help them to increase their interoperability and also to achieve all the decisions taken in the Alliance.

Secretary Austin: Regarding our force posture, I think you heard me say earlier that our posture in the region continues to present a credible deterrent against Russia and should deterrence fail, it allows us to be in a better position to operate more effectively. And I mentioned earlier that I don’t have any announcements to make today, and I will stand by that statement from earlier. We certainly treasure the tremendous partnership and cooperation that we receive from our partners here and we will continue to look forward to the same kinds of activities in the future. Again, no announcements to make today.

Question from Radu Tudor, Antena 3 TV and Jane’s Defense Weekly Romania’s correspondent: Secretary Austin, what is the U.S. commitment to the Black Sea region? Here we are confronting a more assertive and aggressive Russia and what is your evaluation for Romania’s role on the NATO Eastern Flank? Thank you.

Secretary Austin: Security and stability of the Black Sea are in the U.S. national interest and are critical to the security of NATO’s Eastern Flank. It goes without saying that the region is vulnerable to Russian aggression, and we have seen evidence of that by ongoing actions in Eastern Ukraine, occupation of parts of Georgia, militarization of the Black Sea, and provocative actions in the air and at sea. I would go further and say that Russia’s destabilizing activities in and around the Black Sea reflect its ambitions to regain a dominant position in the region and to prevent the realization of a Europe that is whole, free and at peace. And so, again, the Black Sea region is in the U.S. national interest, and we will stay focused on it, and we will continue to work with our partners in the region.

Radu Tudor: And your evaluation about Romania?

Secretary Austin: Obviously, Romania plays a key role in this region and certainly hosting 1,000 of our troops here and working alongside other partners in the region to promote freedom of access to the Black Sea, I think is critical. We had a great discussion on that this morning, and we look forward to Romania continuing to play a key role.

Question from James Garamone, DoD News: Thank you for doing this. Mr. Defense Minister, the Black Sea Initiative. I was wondering if you could just flush that out a little bit more. What do you need from the various countries in the region to make it a reality? And Mr. Secretary, I was wondering if you would be so kind as to preview the NATO Defense Ministerial and how what you have learned on this trip will influence what you are going to discuss there?

Minister Ciuca: So, we have discussed all aspects which are related to the very comprehensive threats and challenges we face on the Black Sea and in this regard, we, as a nation, have started, since our political agreement was to allocate 2% from our GDP to modernize our armed forces, which means that we are very conscious that defense starts at home, and we are playing our role in this regard and all these bilateral activities are to identify the other lines of approach in order to see how we complement each other in regard of dealing with threats and challenges we are facing in the Black Sea. So, this is on one hand. On the other hand, we are doing our best within the Alliance, within the European Union to create those military instruments which enable us to leverage all these difficult situations and also to support our partners in the region.

Secretary Austin: In terms of looking forward to our next series of meetings at NATO, no doubt, a lot to discuss, the first thing is to review the progress on the decisions from the 2021 Summit. Also, reinforcing the need to continue building credible deterrence capabilities. As you would imagine, no doubt, we will talk about NATO’s role post-Afghanistan and some of the lessons learned from Afghanistan, and we will also, hopefully, have an ability to talk, or an opportunity to talk about our current counter-ISIS efforts and discuss some things with our Allies here that are involved in that coalition. So, I look forward to some very, very productive discussions and let me just say, as we end here, that I remain grateful to the tremendous hospitality that we have received from our partners here, and I will also remain enormously grateful for the hospitality they have shown our troops that are continuing to rotate in and out. It is a wonderful partnership, one that we will continue to build upon and strengthen. Thank you.