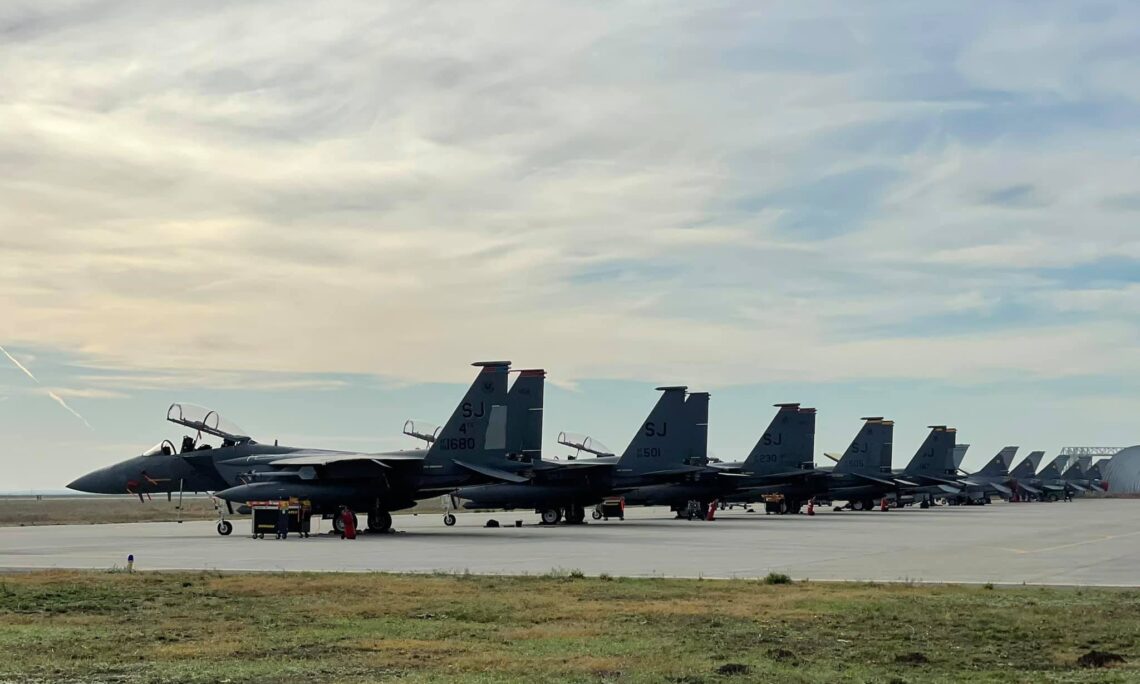 From Oct. 30 – Nov. 6, F-15E elements again forward deployed from Larissa Air Base, Greece, to Graf Ignatievo AB, Bulgaria, and Borcea AB, Romania, simulating airfield opening procedures and Agile Combat Employment. Along with combined training between NATO air forces, allied integration expanded to include assets from the U.S. Navy’s Sixth Fleet. The Strike Eagles supported protected entries of the USS Porter and USS Mount Whitney into the Black Sea as both vessels continue routine patrols in the region. For the Mount Whitney mission, the U.S. fighters teamed with a Greek EMB-145 and a Turkish E-7T, which provided air surveillance and command and control. This convergence of allied integration demonstrates air-maritime operations as a cornerstone of NATO multi-domain operations, as well as the alliance’s ability to form a responsive joint force.

“Castle Forge continues to demonstrate the value that working alongside allies brings to the table, not only for airpower but across the entire spectrum of military operations,” said Gen. Jeff Harrigian, NATO Allied Air Command and USAFE-AFAFRICA commander. “We are proving that our force is more flexible, more cohesive, and more capable when we train together.”

The Strike Eagles arrived in Europe for Castle Forge on Oct. 6 and conducted training alongside the Hellenic Air Force at Larissa Air Base, Greece, from Oct. 11-17. Subsets of the unit forward deployed to Graf Ignatievo AB, Bulgaria, and Borcea AB, Romania, from Oct. 18-25 to exercise Agile Combat Employment and conduct vital training alongside the Bulgarian and Romanian air forces. The F-15Es returned to Larissa AB, Greece before launching the second forward dispersals to the same locations. The aircraft have since returned to Larissa AB where they will continue operations alongside the Hellenic Air Force.