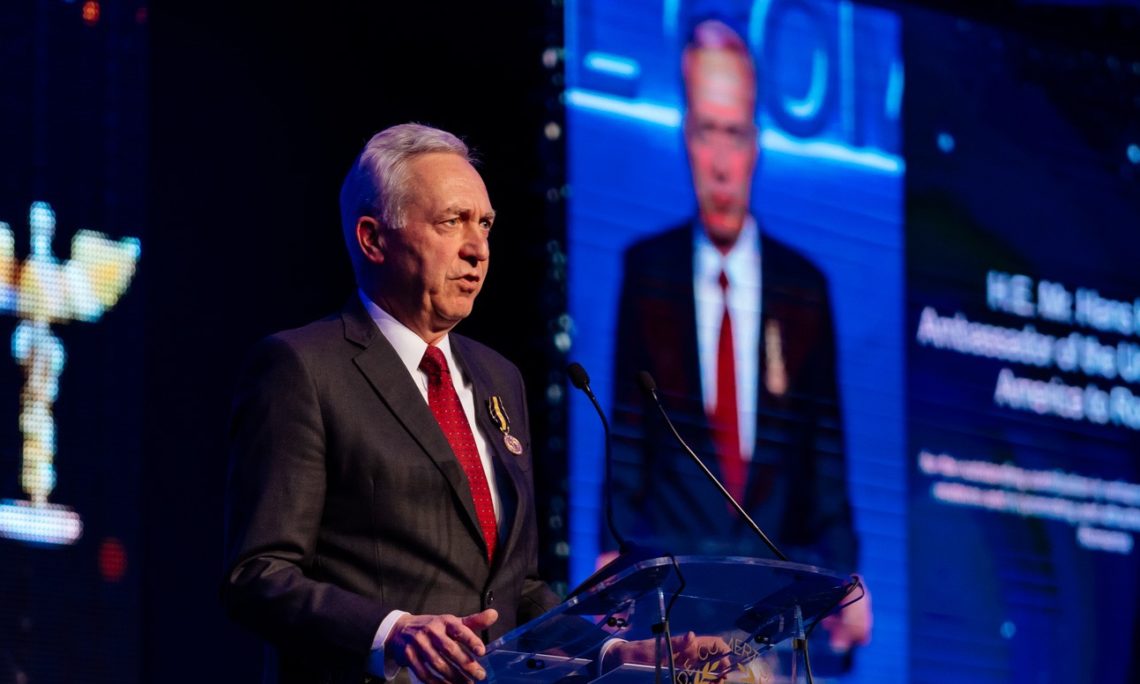 First, President Daraban, thank you for this exceptional honor. I accept it with humility; also I accept it on behalf of my team at the United States Embassy. To the extent that we’ve had success in the economic dimension of our Strategic Partnership, it is through their hard work: the members of the Foreign Commercial Service, the members of the State Department economic team, and all actually at the Embassy who devote themselves every day to strengthening every dimension of the strategic partnership, but especially the economic dimension.

Mister President [Iohannis] you remember when I presented my credentials to you a little bit more than three years ago, I asked for your advice and where I should focus my efforts and the efforts of my country in our relationship with Romania. You said, “of course, Mister Ambassador, we expect you to continue to strengthen our security, a partnership both as common allies within NATO, but also as strategic partners, but Mister Ambassador, please also focus on the economic dimension of our relationship.” I took that advice seriously; it fit very well with the instructions that I had received from my president. Written instructions to both encourage and support American companies as they sought to invest in Romania and sought to sell their goods and services to their Romanian corporate partners or to Romanian consumers, and to encourage Romanian investors seeking potentially a home in the United States.

So how have we done? In partnership with the Romanian Chamber of Commerce and Industry, in partnership with the American Chamber of Commerce, some of the outcomes of our efforts have been pretty impressive. For example: the growth in bilateral trade in goods between our two countries over the past 5 years has grown by 28%. The stock of American foreign direct investment in Romania over the past five years has grown by 80%, and it is now equal to 3.6 billion dollars and according to our calculations, the United States is the fifth largest investor by nationality in Romania. And this is just stock investment, it does not include equity or bond flows. The number of American companies invested in Romania, or companies with U.S. capital, has grown by more than 13% over the past five years and now includes more than 7,600 companies. And another measure of American interest in Romania, I believe, is the number of tourists, American tourists who are visiting this beautiful country. And over the past three years, the number of arrivals of American tourists in Romania has increased by more than 80%, to total more than 300,000 last year.

And as I talk to American companies, routinely, universally they cite the resources of Romania and particularly the schooled labor force as a reason to invest in this part of the world. And, of course they recognize that Romania is part of the European Union as well as its geographic location as a potential entry into Central Asia and the Middle East. And during my three years here, I can only think of one American Company who has sought to exit Romania and only one company for example who has had to shut down operations here, and that was due as you I am sure are very well aware of, to the tightening labor market for skilled labor here in Romania. Of course, much more can be done to attract American investors to Romania. In the end is the shareholders of the American companies who make decisions to invest in Romania, and as president Iohannis said, the factors that they look at, the factors that contribute to an attractive investment climate are predictability, stability, transparency; a willingness of the Government, whether it be at a national level or at a local level, to consult genuinely with business, with stakeholders, and when changes in policy are considered that they be subject to some basic cost-benefit analyses before undertaking.

The rule of law is also important. Investors must be certain that contracts will be recognized by courts. That when commercial disputes occur, the courts will provide for rapid, fair and transparent resolution of those disputes. That the judicial system and the business regulation environment allows for ease of entry to a market, but also ease of exit. And when encountering government, when encountering the public sector, that there is no risk of corruption.

In my work here I also found it is important sometimes to recognize the role of large investors, large companies at play. And, I have been very proud of the success that for example Ford Motor company has had in Romania, that Boeing has had in Romania, that major U.S. companies operating in the defense sector have had in Romania. Not only for the success that they had had individually as companies, but also the strong positive signal that they send to other investors, whether small, medium, or other large companies.

And then of course there are things that we at the Embassy in partnership with the American Chamber of Commerce and the Chamber of commerce and Industry in Romania can do together to encourage investment and trade. And here I have to say president Daraban: we have no stronger partner in Romania than the Romanian Chamber of Commerce and Industry. In the past three years, almost on a day-to-day basis, we cooperated, but we’ve also worked together on some major events: in 2016, the virtual U.S.-European Union Agro Finance for Southeast Europe Forum; the tremendous and generous support that you gave to us as we held the Tradewinds Trade Conference in the fall of 2017, the largest, single trade show that the United states has supported in Romania; your initiative to host together with General Dynamics in March of 2017 a special forum on business without corruption. Just last week, we were together at Indagra, hosting a food and water resources security forum, and very importantly, I want to thank you for your support in SelectUSA.

SelectUSA is an annual event that takes place in Washington, DC. It is convened and hosted by the Department of Commerce. It brings together investment and development agencies from across the United States – the local, regional, state, and federal level – and it is designed to encourage and demonstrate the opportunities that exist in the United States to foreign investors. In June of this year, more than 3,000 participants joined SelectUSA from 62 different countries. In 2016, four Romanian companies traveled to Washington to SelectUSA. In 2017, there were more than 25, and President Iohannis you remember speaking to President Trump about that large growth in interest of Romanian investors in the United States market. In 2018, in June of this year, there were almost 50 Romanian individuals and companies represented at SelectUSA. And Romania was the largest national delegation from Europe to be in Washington, and the 5th largest overall from around the world. For me, this sent a very strong signal: 1) the Romanian economy is doing very well, and 2) as a result of that strong growth of the Romanian economy, you, the Romanian investors, you the Romanian businesses, are increasingly confident about your ability not to compete only here in Romania, and in Europe, within the European Union, but also in the United States, the most competitive market in the world, and I congratulate you on that courage.

To conclude, President Daraban, ladies and gentlemen, the reason why this work is so important to strengthen the economic dimension of the relationship between the Unite States and Romania, is because the United States seeks a more prosperous, more wealthy, more dynamic, more innovative, more entrepreneurial Romania. And why do we seek that? Because if you were more prosperous, you’d be able to bring more energy, more resources, to the Strategic Partnership with the United States, and together we could work even more constructively to bring security, democracy, and prosperity to Romania and to the transatlantic community, and indeed to the rest of the world.

Thank you for your patience, ladies and gentlemen, thank you, Mister President.