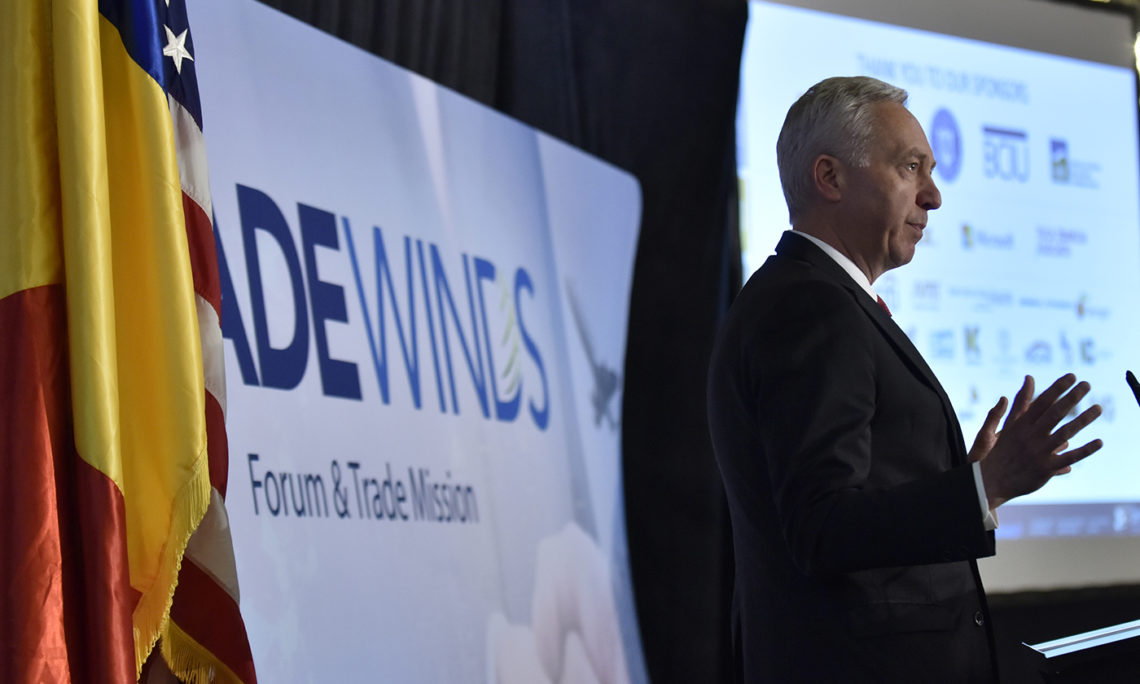 I will try to be brief and not to be repetitive.

As the American Ambassador to Romania, I have three priorities. One is to promote security, the security of the United States, in partnership with our very strong ally, Romania. In this effort, especially in this part of the world, there is no stronger ally, partner or friend for the United States than Romania. We make a tremendous effort together to bring peace and stability to this region of the transatlantic community. We also fight together on battlefields far from Romania. And together across our law enforcement communities and our military, we are leading a very strong fight against corruption, against terrorism, against organized crime, against trafficking in persons and drugs and to counter hostile intelligence efforts against Romania or the United States.

The second priority is to promote democracy, that is, to continue to encourage Romania’s embrace of a democratic future, of democratic values, and the consolidation of its democratic institutions. And an important component of this effort is to strongly support Romania’s fight against corruption, a fight that has been increasingly credible over these past 15 years, a fight that my President has applauded, the efforts of Romania, and has pledged to continue to support.

So, promoting security, promoting democracy; and the third priority I have is to promote prosperity; prosperity for both the United States and our partner Romania.

Since arriving as the American Ambassador to Romania just over two years ago, in my encounters and discussions with the leadership of Romania, whether it be the President, the Prime Minister, all continuously encouraged me to support the strengthening of the economic dimension of our relationship. I responded somewhat to their frustration that in the end it is up to the American companies and their shareholders to make decisions about where they invest and where they do business. And the best thing that Romania can do to encourage companies to seek partnerships, to ensure an investment environment, a business climate that is welcoming and positive, that is transparent, that is predictable, that is stable, and that is consultative of all stakeholders, including the foreign business community.

There are things, however, that the United States Government can do to support the interactions between Romanian and American investors, as well as Romanian business leaders and American business leaders. One such activity took place in June of this year, hosted by the Department of Commerce and the Secretary of Commerce Wilbur Ross. It is called SelectUSA and it is designed to support foreign investors interested in gaining access to the most competitive market in the world, the United States’ market. I was very proud to accompany 30 Romanian companies who participated in this year’s SelectUSA conference in Washington DC.

Another thing that the United States Government can do is organize events such as Trade Winds. And let me thank all of you who are participating in Trade Winds. For the Romanian companies present today and tomorrow: Trade Winds is an annual effort hosted by the Department of Commerce. This is the first time it has taken place in Southeastern Europe, this 10th anniversary of Trade Winds, and it brings together not only over 100 American companies interested in exploring Romania but also as Mr. Tasharski indicated, it brings together the leadership of the Department of Commerce as well as representatives of U.S. embassies from across Europe so you actually have an opportunity here to tap into a regional network of commercial experts that can help your business and make ties with the United States.

For the American participants here, as the Prime Minister mentioned, as the counselor mentioned, as Mr. Tasharski mentioned and as I referenced earlier: there is no stronger partner for the United States in this part of the world than Romania. It’s a peaceful country, one with very strong affections for the United States, it has a rapidly growing economy, the fastest growing in the European Union; it offers an investment climate that is increasingly favorable and it has a government that is, in my experience, very, very interested in deepening the bonds between American companies and Romanian ones. As the Prime Minister noted, just really in the past week, the two of us have been together to celebrate major investments by three major American corporations in Romania — General Dynamics, Ford Motor Company, and Raytheon. These are huge, but just symbolic, of the opportunity that exists for all American companies interested in investing in this part of the world and increasing the trade in goods and services flowing from the United States to Romania.

Let me conclude by thanking all of the sponsors for Trade Winds but especially the Platinum level sponsors – the State of Tennessee, the Appalachian Regional Council, the Business Council for International Understanding, IBM, and most importantly, the Government of Romania. Let me thank you, Mr. Prime Minister, directly and personally, for your incredible support and work that many members of your cabinet have invested in Trade Winds and, truly in conclusion, thank you for your participation and success!