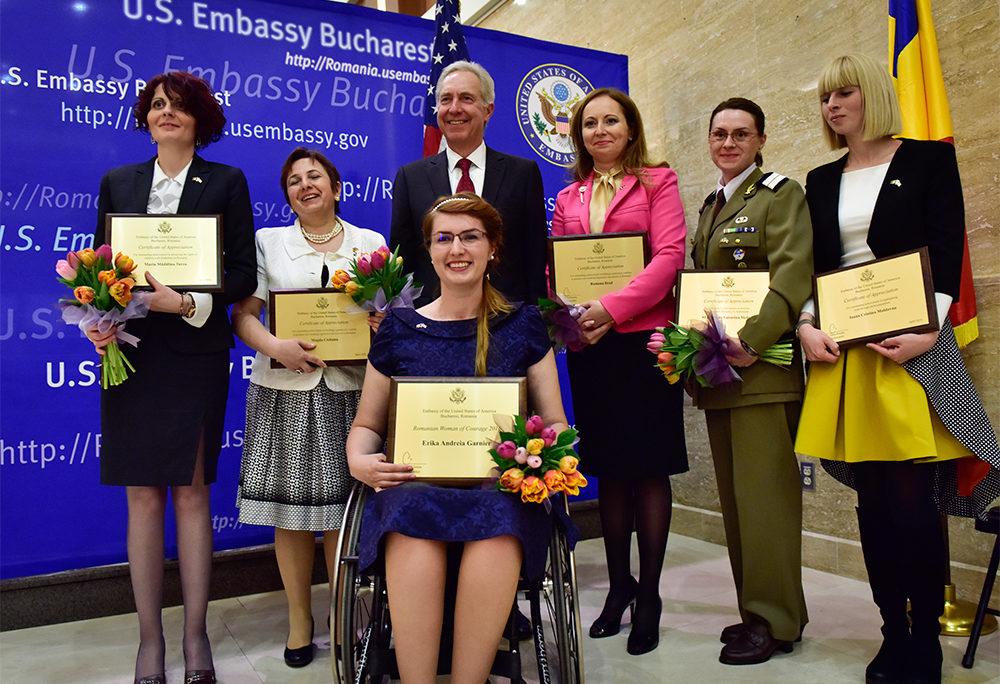 Good evening, everyone.  I am delighted you could all join us tonight to help honor and celebrate six Romanian women who embody compassion, resilience, and, above all else, courage.  While these women come from diverse backgrounds and work in different sectors of society, they are united in their willingness to take on some of the toughest issues facing Romania.  We are grateful for their ongoing efforts and are proud to honor them here tonight.

Yet while we are focusing on these six brave women, this celebration is really about all the women in Romania and around the globe.  The safest, most economically sound and forward thinking countries in the world are those that promote equality and respect for women’s rights.

With this in mind, I would like to say a few words about our principal honoree, Erika Garnier.

Though still relatively early in her career, Ms. Garnier already has what it takes to become a leader in her field, and she does this by serving both as an inspirational trainer and as a living example for others.

She has become a tireless advocate for one of the most marginalized minorities in Romania and throughout the world:  people with disabilities.  Since 2011, Ms. Garnier has worked with Motivation Romania, a well-respected NGO that helps people with mobility challenges discover how they can become more active in their personal, social, and professional lives.

Ms. Garnier first joined Motivation Romania as a volunteer, serving as an independent living trainer.  Her talent and skills were quickly recognized by her manager and she advanced rapidly through the organization, first to Communications Officer and then to Project Manager in April 2014.

Among its projects, Motivation Romania delivers thousands of wheelchairs to disabled Romanian citizens throughout the country each year.  Ms. Garnier coordinates the training for clients and families on how best to use these wheelchairs to achieve freedom of movement and personal independence.

This past October, she also assumed the duties of wheelchair sports coordinator.  In this role, she has been instrumental in the success of the U.S. Embassy’s Sports Envoy Program, which recently brought two U.S. wheelchair tennis players to Romania for an inspirational event.

Capitalizing on this positive energy, Ms. Garnier has continued to expand Motivation Romania’s wheelchair tennis team, all the while organizing events to raise public awareness about wheelchair sports.

What’s more, she has become an articulate, persuasive speaker, empowering audiences with her message that people with disabilities are, in fact, simply people “with different abilities.”

Ladies and gentlemen, may I present to you Ms. Erika Garnier.

Good afternoon, Ladies and Gentlemen. It is my pleasure to welcome you to the U.S. Embassy for our Women of Courage Awards Ceremony.

In 2007, the Department of State established the International Women of Courage Award to honor women exemplifying exceptional courage and leadership in advocating for human rights, women’s equality, and social progress, often at great personal risk.

Annually, each Embassy may nominate one candidate for the State Department’s International Women of Courage Awards. Yet, Romania has many more extraordinary women of courage who are deeply committed to serving their communities. Inspired by their determination, bravery, and compassion, the Embassy will recognize five Romanian women of courage in addition to our International Woman of Courage nominee for Romania for 2016.

We invite Hans Klemm, U.S. Ambassador to Romania, to the stage as we recognize the award winners.

Our first U.S. Embassy Bucharest Woman of Courage award goes to Dr. Magda Ciobanu and Ms. Ramona Brad. Several years ago, Dr. Ciobanu and Ms. Brad helped found what has become the Romania Respira Coalition, a network of more than 250 organizations pushing to ban smoking in public places. Dr. Ciobanu is the Smoking Cessation Center Coordinator at the National Lung Institute. Ms. Brad is the Managing Partner of Clear Communication Associates. Dr. Ciobanu’s medical expertise and Ms. Brad’s public relations background combined to help organize a grass roots movement to protect the rights of non-smokers, as guaranteed by the Romanian Constitution. The women faced an uphill battle, as tobacco companies and retailers had better financing and more resources. Despite challenges, the women continued to pursue the rights of all Romanians, including children, to breathe smoke-free air. They used social media and celebrity endorsements to grow their cause. President Iohannis signed the law banning smoking on January 29, 2016. The law entered into effect on March 16. The Coalition will now continue its work to ensure that authorities implement and enforce the law.

Our next award recipient is freelance photojournalist and documentary photographer Ioana Moldovan. Ms. Moldovan’s career focuses the consequences of conflict on human lives. Over the years she has covered international issues such as the military and political developments in Ukraine, the Euro-Maidan revolution, and the European refugee crisis, among others. Ms. Moldovan has also documented life in former communist workers’ colonies, Roma discrimination, Romania’s elderly, and gender equality. Her work has appeared in numerous international publications. Ms. Moldovan’s professional life is more than an act of courage. She goes to areas where few others dare to go in order to provide objective reporting and to reveal the human drama generated by conflict. As an independent photojournalist, she relies solely on her own talent, resources and determination to reveal her subjects’ stories to the world in order to generate awareness and a positive change.

Seargent Mirela-Valentina Melinte is the first member of the Romanian Armed Forces to participate in a mission with a US Special Forces Detachment. As a member of Battalion S1, Sergeant Melinte’s demonstrated well-developed general and specific military knowledge. Ms. Melinte took part in both combat missions in support of the Special Forces Detachment and in humanitarian missions in support of the local population in Afghanistan. During these operations, Sergeant Melinte proved not only her courage, but her physical strength, her professionalism and her self-control. During one of these missions, she helped transform a building in the village of Darwesh into a distribution center of teaching materials for local schools. This was the first mission planned and conducted entirely by a member of the Romanian Special Operations Forces in the theater of operations in Afghanistan. Her efficient and kind interactions with Afghan women succeeding in collecting essential information about designated targets and assuring that the mission was a success She displayed remarkable morality and showed respect and professionalism in her interactions with the Afghan People, her Special operations team members and coalition partners.