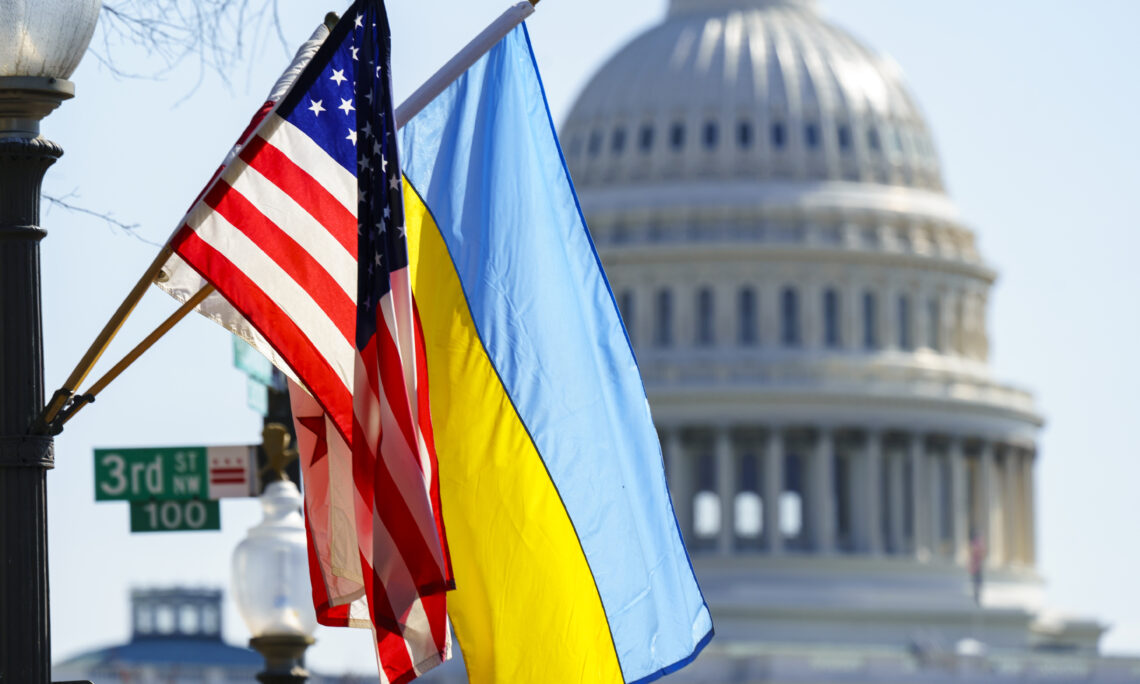 The flags of Ukraine, the United States, and the District of Columbia fly together on Pennsylvania Avenue near the Capitol, Saturday, March 5, 2022, by order of the mayor of Washington. (AP Photo/J. Scott Applewhite)

Ukraine, a country under attack by Russia since 2014, has now withstood half a year of massive bombings, sieges of cities, and atrocities against its people. Ukraine is fighting to defend not only its democracy, but its very survival as an independent country.

August 24th marks the 31st anniversary of Ukraine’s independence. Sadly, the day also marks six months since the Russian government’s unprovoked, full-scale invasion of Ukraine, an attack so shocking to the international community that it was thoroughly condemned by the UN General Assembly and spurred two new countries to seek membership in the NATO Alliance.

We must remain united in our support for Ukraine’s sovereignty, democracy, and European aspirations. Russia’s aggression in Ukraine is one of the most consequential events for Europe since World War II. Russian forces have committed war crimes and atrocities, and their war in Ukraine will have negative ramifications on global food security and the global economy for years to come.

The worldwide reaction to Vladimir Putin’s war against Ukraine has been so visceral and moved so many because in the conduct of this war, we have seen —on a nearly daily basis—of violence, destruction, devastation, and death.

Reports that Russian officials are overseeing so-called “filtration” operations, combined with evidence that its forces have interrogated, detained, displaced, or forcibly deported millions of Ukrainian citizens, including children, have appropriately been met with outrage.

We have all seen the images of the aftermath of Russian bombs hitting civilians sheltering in schools, theaters, and hospitals. Independent media and humanitarian organizations have documented executions in cities like Bucha and Irpin, torture of uniformed and civilian personnel alike, and entire cities like Mariupol cut off from basic necessities while enduring devastation and brutal occupation.

There is also evidence that Russia intends to attempt to annex additional Ukrainian territory by force, rolling out a version of the “annexation playbook” we saw in 2014, installing illegitimate proxy officials to arrange sham referenda on joining Russia. Annexation by force would be a gross violation of the UN Charter and we will not allow it to go unchallenged or without cost. No state should be able to change its neighbor’s borders.

Amidst all this death and destruction, Ukrainians have sheltered in underground bunkers, risked their lives to gather evidence of atrocities, and fought—sometimes street by street—to keep their people, language, liberty, and identity alive. The resilience and tenacity of Ukraine’s people have inspired the world to support their fight for freedom. Ukraine’s armed forces have fought valiantly to defend values we all hold dear.

The United States is supporting a range of international investigations into atrocities in Ukraine. This includes those conducted by the International Criminal Court, the United Nations, and the Organization for Security and Cooperation in Europe. The United States stands ready to support national courts around the world that have jurisdiction over individuals accused of committing international crimes. We also will continue to work with the international community to help Ukraine rebuild.

The consequences of Russia’s war are not confined to Ukraine. Russia’s aggression has upended the global grain trade, endangering food security for many populations. The current crisis also has accelerated inflation and retail prices around the world. Ukraine has endured devastating attacks on agricultural land, transportation, and storage infrastructure, inhibiting its ability to feed its own citizens and so many others globally. In many cases, Russian forces have literally burned Ukrainian fields. Ukrainian farmers, who once hoped for a record summer harvest, now scramble to replace stolen and damaged equipment and fight to keep their families and communities afloat.

The United States continues to support all efforts to ensure Ukrainian food reaches world markets. We will continue to use forums such as the G20 to press Russia to adhere to the recent deal allowing transit of food shipments from Ukraine’s Black Sea ports. With Russia’s brazen attack on the port of Odesa only 24 hours after concluding this deal, along with continued attacks on transportation and agricultural infrastructure, international pressure to unlock Ukrainian food exports will continue to be critical.

Despite the enormous cost Vladimir Putin has inflicted on Ukraine and the world, sanctions by the United States and our partners and Allies are designed to compel the Kremlin to cease its violence and are taking a toll on Russia’s economy, which has required unprecedented (and unsustainable) Kremlin intervention to prevent significant damage.

Economists predict that, in the longer term, as sanctions are expanded and tightened, the Russian government will run out of stalling tactics and the true costs of its actions will become painfully real for the Russian people.

The evidence is already there for anyone to see. The Kremlin has failed to report key macroeconomic metrics for several months. Despite Putin’s claims that Russia was faring better than the EU, the actual figures say the opposite, with Russia’s economy contracting by four percent in the second quarter of 2022, while the EU’s economy grew by that same margin. Russia has already missed two debt payments and defaulted on its foreign currency debt for the first time in more than a century.

Coordinated sanctions have also frozen more than half of the Russian Central Bank’s reserves, money the Kremlin would otherwise use to finance its war machine. The lack of access to imported inputs and finished goods, particularly goods embedded with sophisticated technologies, has created bottlenecks and, over time, will further impair production, transport, and commerce, and importantly, the production and maintenance of military hardware.

As sanctions continue to degrade Putin’s warfighting capabilities, Ukrainian forces are successfully defending their country and the Ukrainian people are more united than ever.

Since Russia’s full-scale invasion began in February, more than 50 countries have joined the United States to deliver security assistance to Ukraine. Together, we are expediting shipments of even more of the weapons Ukraine is using so effectively to defend itself.

The United States has committed nearly $10 billion in security assistance since Russia launched its premeditated, unprovoked, and brutal war against Ukraine on February 24. This includes artillery systems and ammunition, armored vehicles, and advanced air defense systems for Ukraine. As a result of Ukraine’s resilience, more than 2.6 million displaced persons have returned to Ukraine– more than a third of those who initially fled.

Ukrainian civil society has expanded its humanitarian response efforts, shepherding aid, and rebuilding communities. Aid workers, the majority of whom are Ukrainian, are operating across all 24 oblasts, reaching nearly 12 million people with assistance. The United States is proud to support their efforts with over $1.2 billion in humanitarian assistance this year alone.

From Main Street to the Maidan, Capitol Hill to the EU Concilium, broad support for Ukraine has demonstrated that unprovoked attacks on sovereign, independent states will not go unanswered and will come at a very high price. The United States and its Allies and partners around the world are more united than ever.