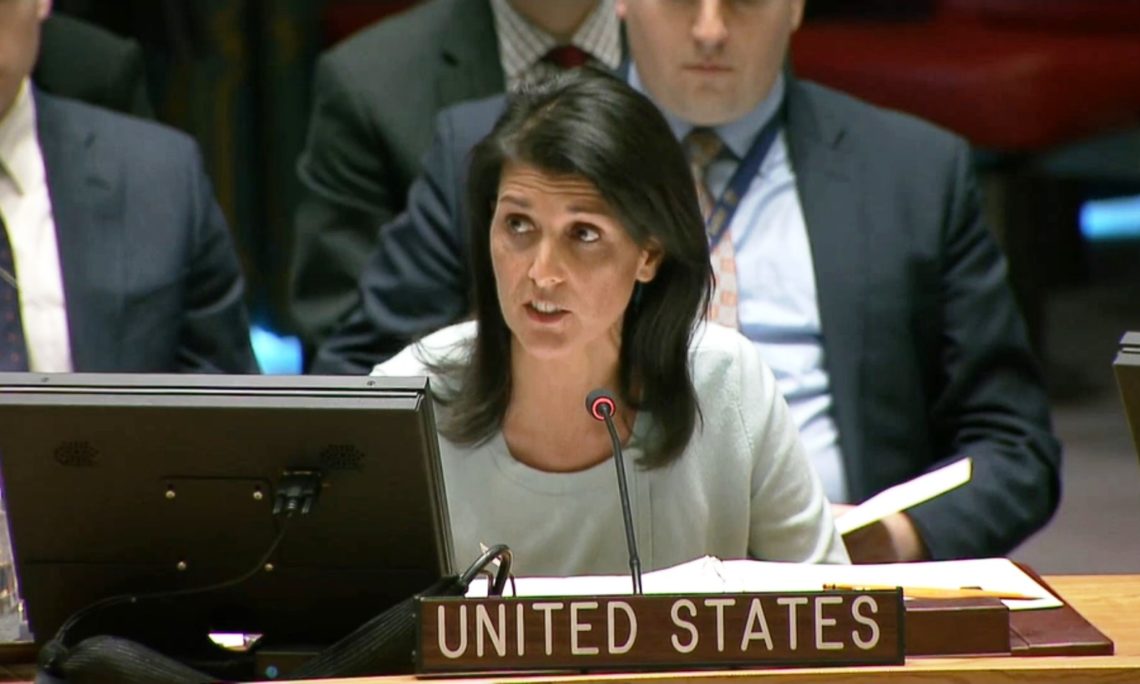 This is my first appearance in this chamber as the Permanent Representative of the United States. It is an immense honor for me to sit behind the United States placard and to follow in the footsteps of so many giants of American diplomacy. It is humbling to be part of a body whose responsibility is nothing less than maintaining international peace and security. I look forward to working closely with each of you on this Council. The United States is determined to push for action. There is no time to waste.

I consider it unfortunate that the occasion of my first appearance here is one in which I must condemn the aggressive actions of Russia. It is unfortunate because it is a replay of far too many instances over many years in which United States Representatives have needed to do that. It should not have to be that way. We do want to better our relations with Russia.However, the dire situation in eastern Ukraine is one that demands clear and strong condemnation of Russian actions.

The sudden increase in fighting in eastern Ukraine has trapped thousands of civilians and destroyed vital infrastructure. And the crisis is spreading, endangering many thousands more. This escalation of violence must stop.

The United States stands with the people of Ukraine, who have suffered for nearly three years under Russian occupation and military intervention. Until Russia and the separatists it supports respect Ukraine’s sovereignty and territorial integrity, this crisis will continue.

Eastern Ukraine, of course, is not the only part of the country suffering because of Russia’s aggressive actions. The United States continues to condemn and call for an immediate end to the Russian occupation of Crimea. Crimea is a part of Ukraine. Our Crimea-related sanctions will remain in place until Russia returns control over the peninsula to Ukraine. The basic principle of this United Nations is that states should live side by side in peace.

There is a clear path to restoring peace in eastern Ukraine: full and immediate implementation of the Minsk agreements, which the United States continues to support. For the people in eastern Ukraine, the stakes are high. With each passing day, more people are at risk of freezing to death, or dying from a mortar blast.

The United States calls on Russia and the combined Russian-separatist forces to fulfill their commitments in the Minsk agreements and fully restore and respect the ceasefire. The Minsk agreements require the disengagement of forces and withdrawal of heavy weapons from both sides of the contact line. This is the formula for a sustainable ceasefire. Pulling back forces and taking heavy weapons out of this area will save lives. The Organization for Security and Cooperation in Europe Special Monitoring Mission must also be granted full, unfettered access. The presence of OSCE monitors can help calm tensions.

Cooperation on this issue is possible. Earlier this week, both Russia and Ukraine supported this Council’s unanimous call to return to a ceasefire. It was the first time in years that this Council was able to come together on Ukraine. The parties on the ground should heed this signal and hold their fire. The United States expects that those who can influence the groups that are fighting – in particular, Russia – will do everything possible to support an end to this escalation of violence. Thank you.