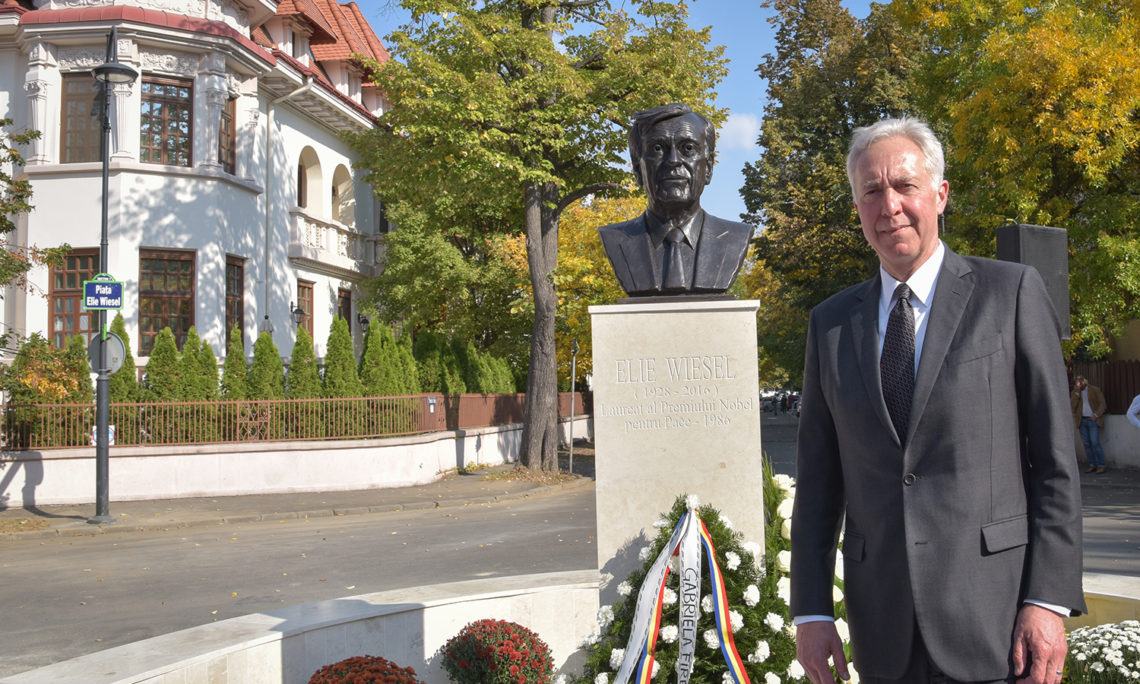 There are many parties that deserve recognition for the completion of this commemoration, of this project, but let me above all first thank to Mayor Firea, and the government of the municipality of Bucharest for their unwavering, their prompt and very generous support for this project, beginning in 2016 with the naming of this “Piaţa” for Dr. Elie Wiesel. Then, of course, we must thank Dr. Alexandru Florian, Elisabeth Ungureanu, and their team at the Elie Wiesel Institute for their vision, their dedication and commitment.

Elie Wiesel was not just a Romanian hero, or a Jewish hero – he was a hero for all who exemplified the universal goodness of the human spirit. With this statue, and this public square, that spirit is now ensconced here in Bucharest for generations to come. As people grow, and the world changes, and politics and society swirl about this busy metropolis, this statue will stand resolute and unmoving, a permanent reminder of Wiesel’s values.

There should be no doubt that those values will need to be called upon in dark times to come, just as they were in the past. We must not surrender to apathy, we must not let our guard down, we must not submit to the forces of hatred and intolerance. Instead, we must stand firm and embrace the values embodied by Elie Wiesel to guarantee the positive progression of history.

Elie Wiesel represents the pure expression of the ideals we aspire to – the defense of the vulnerable against the malicious, the courage to speak up, even if others do not, and the vision of a world that welcomes everyone. Let us look to him, and to those ideals when times are dark, and let us all work together to allow tolerance and acceptance to continue to grow and flourish all around the world.

Before concluding, let us note the progress that has been made on Bucharest’s anticipated Museum of Romanian Jewry and the Holocaust. It will serve in the coming years to provide a historical narrative, a narrative that is largely missing in Romania’s national discussion. Just a couple of weeks ago, a competition was opened on the design of the museum. We thank Alexandru Florian and his team at the Elie Wiesel Institute, as well as his counterparts at the United States Holocaust Memorial Museum, for spearheading these efforts.

Thank you for your attention and your patience.