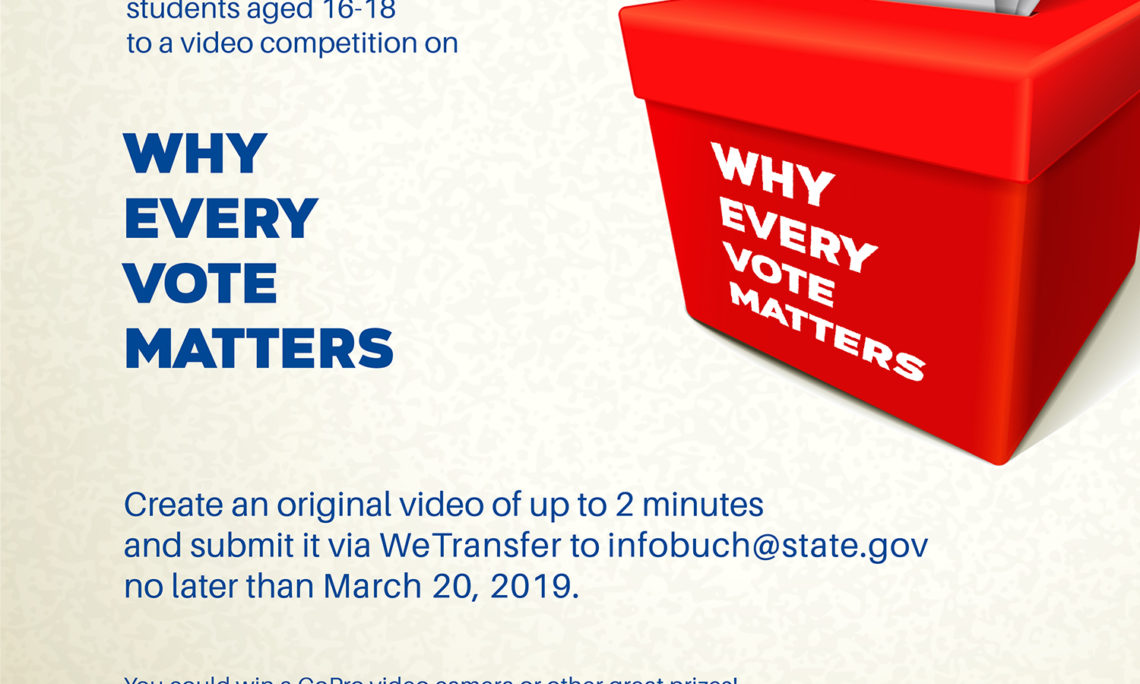 Why Every Vote Matters. Video Contest

On May 23 teachers and high school students, and American diplomats gathered at the American Corner Bucharest to honor the winners of the student video contest “Why Every Vote Matters”.

This contest was launched on February 13, 2019 to raise awareness about civic engagement and the importance of voting. The Embassy received 76 videos from 30 high schools and colleges in Romania. The videos were judged on effectiveness in raising awareness about civic engagement and voting, on originality and creativity, and on quality by a jury composed of Americans affiliated with the U.S. Diplomatic Mission to Romania.

In her opening remarks, Public Affairs Officer Merry Miller congratulated all participants and encouraged them to participate in the future in these kinds of competitions.

The eighteen contest finalists were:

The three winner teams are:

As part of the campaign to increase civic responsibility for presidential elections in Romania in 2019, the U.S. Embassy launches a video competition on “WHY EVERY VOTE MATTERS” on February 13, 2019.

Working individually or in teams of no more than two people, Romanian high school students aged 16-18 are invited to create a video clip of no more than 2 minutes, on the above theme and to submit it via WeTransfer to infobuch@state.gov no later than March 20, 2019. The video submission will be in .mp4 format and will be accompanied by 2 files, in .srt format, containing the subtitles in English and in Romanian.

Participants should include their full name, e-mail address, phone number, high school, and the name of their English teacher in their submission. Children or any other family members of the U.S. Embassy employees are not permitted to participate in the competition.

A jury composed of American diplomats and Fulbright grantees will select the top three videos. Videos will be judged on effectiveness in raising awareness about the importance of voting; originality and creativity; and video quality.

The U.S. Embassy will award the top prize, a GoPro video camera, during a special ceremony in May 2019. Winners of the 2nd and 3rd places will be awarded a digital camera and an eBook reader, respectively. The three winners’ videos will be highlighted on the U.S. Embassy website and on other online platforms. All participants – students and teachers alike – will receive certificates from the U.S. Embassy to recognize their efforts.

Creating videos on “Why Every Vote Matters”

In the lead-up to the Romanian Presidential Elections, the U.S. Embassy in Bucharest invites high school students aged 16-18 to participate in a video contest to raise awareness about importance of youth civic participation in Romania. In addition to prizes for the best videos, winners could have their videos featured on the Embassy’s online platforms. The theme of the contest is “Why Every Vote Matters.” We are looking for creative, catchy videos that best express the theme. Winners will be selected based on the video’s effectiveness in raising awareness about the importance of everyone voting.