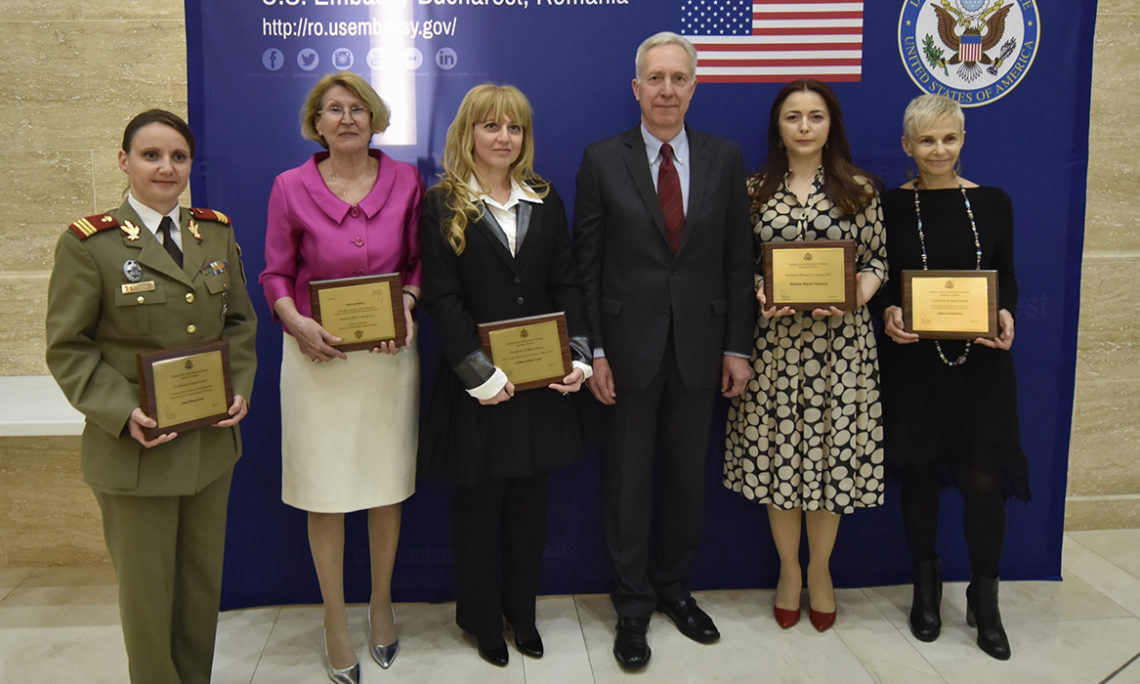 Good evening, everyone.  I am delighted you could all join us to celebrate five Romanian women who embody compassion, resilience, and, above all else, courage.  While these women come from diverse backgrounds and work in different sectors of society, they are united in their willingness to take on some of the toughest issues facing Romania.  We are grateful for their ongoing efforts and proud to honor them here.

When First Lady Melania Trump spoke recently in Washington at the International Women of Courage ceremony, her words could just as well describe all the women we are celebrating this evening.  And I quote:

“Each one of these heroic women has an extraordinary story of courage which must inspire each of us to also achieve more than we have ever imagined possible. Their lives remind us of the boundless capacity of the human spirit when guided by moral clarity and desire to do good.”

With this in mind, I would like to say a few words about our principal honoree, Simona Voicescu.

When she first realized how few NGOs were working in the field of domestic violence, Ms. Voicescu knew this was where she needed to focus her efforts.  She began her NGO, Asociatia Necuvinte, as a one-woman operation in 2013, and immediately exposed herself to possible retribution from the abusers themselves, as well as to entrenched thinking about the roles of men and women in society.

She would meet with domestic violence victims in public parks and at coffee shops with no one around to protect them.  She registered her NGO under her home address, which was then made publicly available.  She fielded threatening phone calls and emails from abusers, but she held her ground.  While she admits to being afraid at the beginning, she summoned her courage and persevered.  And she has persevered not only against the abusers, but against government officials who, initially at least, did not share her level of concern or her spirit.

But thanks to Ms. Voicescu’s tireless advocacy, in just a few short years she has become a leading voice in addressing an issue that has long been taboo here in Romania.  And, more importantly, she has gotten results.

Necuvinte now employs three people full time and draws on a dedicated “army” of around 50 more committed volunteers.  Through her organization, Ms. Voicescu has been instrumental in strengthening the national law on restraining orders and in educating the public and law enforcement on identifying and assisting victims of domestic violence.

Her success has come from her ability to develop relationships in both the corporate and government worlds.  The corporations provide the funding she needs for her programs; the politicians and police pass and enforce the laws that make Romanian women safer.

Ms. Voicescu’s pragmatic, tireless and courageous work ethic attacks the perception that domestic violence is a private issue that has always existed and cannot be solved.  As a result, domestic violence victims have a powerful advocate, while other would-be activists have a source of inspiration as they begin their own work.

Ladies and gentlemen, may I present to you this year’s U.S. Embassy Woman of Courage, Ms. Simona Voicescu.

Good evening, Ladies and Gentlemen.  I am David Schlaefer, political counselor here at the U.S. Embassy, and it is my pleasure to welcome you to this year’s Women of Courage Awards Ceremony.  I would particularly like to welcome our honored guests this evening, including parliamentarians, government ministers, state secretaries and advisors, military leaders, members of the diplomatic community, and, of course, our past award winners.  Thank you for taking the time to join us this evening.

In 2007, the Department of State established the International Women of Courage Award to honor women who exemplify exceptional courage and leadership in advocating for human rights, women’s equality, and social progress, often at great personal risk.

Annually, each Embassy may nominate one candidate for this award.  Yet, Romania has many more extraordinary women of courage who are deeply committed to serving their communities.  Inspired by their determination, bravery, compassion, and, of course, their courage, tonight the Embassy will recognize four Romanian women of courage, in addition to our International Woman of Courage nominee for 2017.

Now, without further ado, I would like to invite Hans Klemm, U.S. Ambassador to Romania, to come up as we recognize our award winners.  I would also like to introduce Kathy Pate, from our Human Resource Department, and Katie Carnell, of our Community Liaison Office, who will help present the awards.

Our first award this evening goes to Captain Alina Ţucǎ, of the Romanian armed forces.  Captain Ţucǎ’s career has been characterized by determination, excellence and a series of pioneering “firsts.”  In 1999, she was told there were no places for female candidates at the Military High School.  So she joined the Army in 2004 and graduated from the Land Forces Academy.  As the valedictorian.  Several years later, she graduated with a Master’s in Human Resources.  Again, as valedictorian.

Captain Ţucǎ has deployed twice, and served with distinction and courage:  to Afghanistan and the Democratic Republic of the Congo.  It was in the Congo that she took on the thorny issue of gender equality, directly challenging the country’s traditionally male-dominated society.  As anyone who has worked on central African gender issues knows, the challenges and danger in this realm are extreme.  During her daily interactions with village elders, she pushed to include prominent village women in order to recognize their contributions and address their concerns.  She also organized events that brought male and female villagers together – a rarity in that country and nothing short of courageous –to foster community.  Through her efforts and her patience and her courage, she eventually won the men over.  As a result, three villages within her Area of Responsibility ultimately elected women as their chiefs, allowing a new group of leaders with a fresh viewpoint to take control.

The relationships she formed with these women helped her and her colleagues’ work as well.  With her thorough understanding of how local Congolese women valued security, health, and education, Ţucǎ was able to ensure that money allocated toward projects there offered a direct, positive impact on the most vulnerable members of society.  Today, thanks to her courage, these woman and their families are better off because of her efforts.

Our next award recipient is Violeta Dascalu.  Ms. Dascalu has taught for 28 years. For the past eight years, she has served as director of the Ferdinand I primary school in Bucharest’s Obor District.  This school has just over 700 students, in grades 1 through 8, and many of them come from disadvantaged backgrounds.  Combine this with low salaries for educators, limited classroom space, minimum teaching supplies, and a lack of teacher training and you have what could be a disaster in the making.  However, as director, Dascalu has pushed her students – and her teachers – to thrive in this environment by creating partnerships and by innovating.  Standing against the status quo and entrenched ideas can pose challenges to a person’s societal standing and, sometimes, career.  Violeta has shown courage in challenging popular perceptions of disadvantaged children and in bucking the status quo.

Violeta has worked with universities, a theater academy, the police, and even a martial arts federation.  As a result, university students teach free computer science coding classes to her students on weekends.  Exchange students from France, Germany, and Spain teach foreign languages.  And a local NGO has guided students in creating a permaculture garden, which the students maintain and which promotes community spirit, healthy eating, freedom to create, independence, and, above all, a sense of pride.

Though more than one third of the students at Dascalu’s school qualify for social assistance, only eight dropped out in 2016, down from 50 in 2010.  And though nine other schools turned away a particularly disabled child, Dascalu took her in and saw that she received a proper education.  It is this dedication that truly sets her apart.

Our next award goes to Sabina Fati.  As a reporter for Radio Free Europe from 1994 to 2002, Ms. Fati literally helped build democracy in Romania, via her daily reports promoting transparency and anti-corruption.  And she did this at the expense of her own safety.  Soon after giving birth to her daughter in 1999, she was physically attacked on the street by an unknown individual, while reporting on the lack of transparency in government security institutions.  In an attempt to intimidate her to stop her reporting, she was harassed, as were her family and her neighbors.  But she did not quit.  She had courage.  She continued her journalistic and academic career covering politics, human rights, and social and economic developments in Romania and the Republic of Moldova.

Convinced that Romanians and Moldovans know too little about their neighbors and that Communist-era governments intentionally obscured history, Sabina again risked her safety by travelling to write about regimes whose foreign policy could influence the security of Romania and the world.  She traveled – alone – through the Gobi desert, central Asia, Iran, Azerbaijan, Georgia, Turkey, Ukraine, Russia, Crimea, Abkhazia, and Bulgaria.  Along the way, she faced military checkpoints, interrogations, accusations of being a spy, a rape attempt, a murder attempt, and a coup d’état.  Through it all, she strove to tell the human stories behind the official realities, and to show how isolated neighboring countries can become without proper knowledge of one other.  Through her courage, we are all better informed.

Our next award goes to Dr. Letitia Coriu.

In August 2015, Romania’s Supreme Court barred healthcare professionals from accepting informal payments.  Soon after, the Government announced it would present a bill allowing them to do so.  This was all too much for Dr. Coriu, an anesthesiologist here in Bucharest.  Frustrated by her colleagues’ low salaries and subsequent need to accept under-the-table payments to supplement their incomes, she took to Facebook and began a revolution.  After gathering 17,000 followers in a matter of days, Coriu gave birth to the Doctors’ Alliance, which vehemently opposed the Government’s proposal to legalize what they called “bribery” and, more importantly, shone a light on an underfunded, corrupt, and poorly managed healthcare system.  This courageous advocacy, which challenged an entire industry, and undermined a Governmental initiative, caught the attention of the Health Minister, led to the defeat of the proposal, and ultimately won a 25 percent salary increase for healthcare professionals.

But this was not enough.  As Dr. Coriu’s Facebook group grew to 30,000 followers, and she saw how it was possible to change policy, she created a formal NGO, the Doctors’ Alliance for Health Sector Reform.  This alliance then successfully challenged the inadequate compensation paid to doctors working on-call shifts, resulting in higher payments for working nights and being on-call.  But this was not enough either.  Coriu’s Alliance then joined other groups to form a union, which is now pushing for better working conditions in healthcare.  And adequate wages for all healthcare staff.  And nothing less than radical healthcare reform.  While many Romanians have called for an end to corruption in the healthcare sector, Dr. Coriu, through her courageous efforts, has delivered.