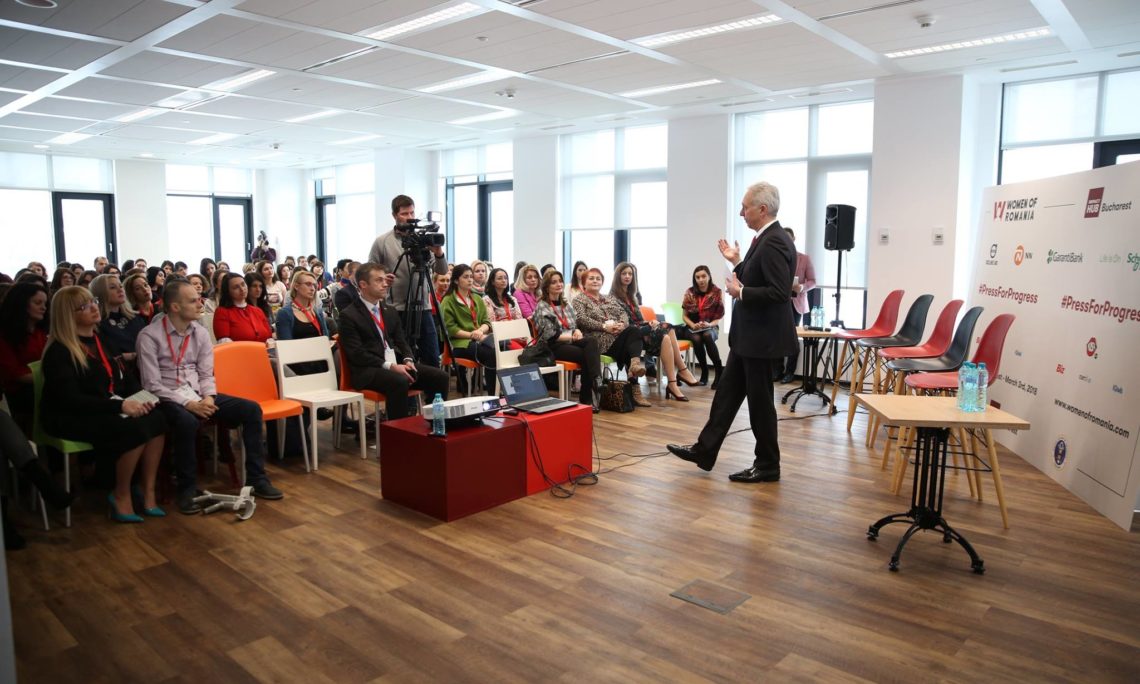 Thank you for the introduction but more importantly, thank you for giving me this opportunity to be with you this morning. This is the second year that “Women of Romania” and Impact Hub have been generous enough to invite me and my wife Mari to join you.

Let me explain why this is important to the Embassy of the United States of America. Why am I here? Why are we here? It’s been the case for many, many years that the United States Government does have a strong interest in first gender equality – this is a value of importance to America; it’s a value that we haven’t fully realized in the United States yet either, there are still many, many instances of gender inequality in the United States, including when you look at economic outcomes, there is still a significant wage gap for example between men and women working in the American economy. But nevertheless, we embrace this value firmly and we are committed I think as a society and looking at the rule of law, to ensuring that both social-economic and legal outcomes are equal for all citizens, whether they’re male or female, it doesn’t matter. We are also working internationally. We very much see the value again, but also the importance of the role that women can and should play in the economy and society in countries around the world. This, again, has been a policy imperative of the United States Government for many years. It had considerable support and energy behind it – as you can imagine – when Hillary Clinton was the Secretary of State. During her tenure as my boss, I had the honor to serve as our coordinator for APEC (the Asia Pacific Economic Cooperation) and in that context we did a lot of work – Secretary Clinton, her team and myself as well – on trying to focus the work of APEC on the question of women in the economy. But it continues today and that’s why I am here, that’s why we are a very lucky co-sponsor of today’s conference.

I do have some prepared remarks so I would like to ask for your indulgence as I go through these. But I would like to contribute to today’s conversation by noting that this is not an issue of importance just to the United States, or to Romania – the role of women in the economy, the role of women in the society is truly a global issue. Both in the United States and in Romania, women still face challenges of course and as we try to explain why women’s economic empowerment should be a priority for both our governments and societies, events like this are very, very important to make sure that that focus continues.

What I would like to do is offer a couple of suggestions on how our work might be structured and focused particularly on two particular areas.

Economic empowerment for women and closing the gender gap are important not just for the United States, but these are global issues. Increasing women’s economic participation strengthens prospects for economic growth, and benefits families, communities, and countries. Research is clear; it has found that women entrepreneurs are major drivers of economic growth and development, especially in developing and emerging economies like Romania’s.

For example, in 2016, an estimated 163 million women were starting or running new businesses in 74 countries worldwide. In addition, an estimated 111 million were running established businesses. Women entrepreneurs provide incomes for their families, employment for their communities, and products and services that bring new value to the world around them.

But there are also barriers to progress. Globally we find there are four key areas that injure, if you will, the ability of women to start their own jobs, to engage in entrepreneurial activity and to grow their businesses. These probably won’t be a surprise to you but they are: access to markets, just even accessing, entering markets; access to capital, to finance; building necessary skills and capacity to grow their businesses; and the lack of independence and adequate voice in politics and in society. Because of these barriers that limit the ability for women to succeed, women engage in 31 percent less total entrepreneurship activity than men at a global level.

According to the OECD, on average, female-owned enterprises register lower profits and labor productivity than male-owned enterprises due to the adverse conditions that they face – again primarily the ability to enter markets or ability to grow and expand their businesses. Among these four factors, limited access to finance is probably the most significant barrier. The World Bank has calculated that 70 percent of women entrepreneurs in emerging economies have expressed difficulties in accessing adequate finance, resulting in a nearly $300 billion credit deficit for women-owned SMEs. $300 billion, i.e. women are denied that amount of financing relative to men entrepreneurs everything else being equal.

Data also indicates that firms perform better when women are at the helm. According to one study, firms where at least 30 percent of the executive leadership are women register an estimated 15 percent increase in profitability. Yet, women remain widely under-represented in business leadership positions: in the United States, in my country, although women comprise 47 percent of the labor force, they occupy only about 6 percent of corporate CEO or other executive positions in corporations.

The OECD estimates that closing the gender gap in labor market participation could add 10 percent to the United States’ GDP in the next 10 to 12 years. So much work remains to be done in the United States, but as you know first-hand, also in Romania for greater gender parity and economic empowerment for women. According to EU’s European Institute for Gender Equality which scores all 28 members of the European Union on this question of gender and has developed an index based on work, money, knowledge, time, power, and health factors. According to this index in 2017 gender equality index, Romania ranked 25th out of 28 EU countries. That is a low score, but it indicates that the potential for improvement is also very, very great.

So how could we potentially realize an improvement in gender equality in Romania? Let me explore two possible ways, according to a study published in 2015 in the Journal of Small Business Management which examined the effect of women’s political empowerment and the effect of the rule of law on female entrepreneurship in 53 countries.

Political empowerment was represented as the proportion of seats held by women in national parliament. Rule of law was measured by the strength of enforcement of laws and regulations that have an influence on the private sector, including business startup activity. This includes the extent to which there exists confidence in the courts and police, and in the enforcement of contracts and property rights. The results of this 2015 study showed that women’s startup activity was positively associated with both political empowerment and the rule of law. So when women had a voice in politics and when the legal playing field was equal for both men and women, that’s where you saw higher entrepreneurship activity by women.

The research explained that women in political positions ranging from local to national levels can remove cultural and institutional barriers to entrepreneurship, and can advance policies that promote women’s participation and achievement in the economy. At the same time, rule of law provides a legal and regulatory structure to protect business activities of women, particularly important when the informal culture – not the legal culture, but the informal culture — can work against these endeavors, the eagerness for women to be engaged in entrepreneurial activity. Rule of law also empowers women to become entrepreneurs and be confident that their business activities will be promoted.

You’ve heard me speak and my predecessors speak often about our support for Romania’s fight against corruption and the strengthening of the rule of law in Romania and this study indicates that the positive outcome of strong rule of law is more that ensuring that those who steal from the public treasury go to jail; it also supports protecting both the equal rights but also the equal opportunities that everybody has to start a business, to ensure that contracts are enforced when they choose to close a business that it’s done in a way that protects them. Rule of law and the enforcement of contracts is very important including for women who seem to become entrepreneurs or seek to grow their businesses.

Recently I had my first meeting with the new Prime Minister, Madam Dancila. There was some reporting in the media about that meeting, about what was discussed between me and the Prime Minister and what wasn’t. One thing I can share with you, which was discussed, and this is a topic that the Prime Minister raised was her interest – not surprisingly – in the role of women in Romanian politics, Romanian society and the Romanian economy. And she asked me: Mr. Ambassador, what can we do together to promote these goals, greater access of women in the economy, a greater role for women to play in the society, a greater role for women to have in Romanian politics. I was very, very pleased that she raised this. At the Embassy we have a special task force that works on this issue; that is why I am here, that is why the Embassy is a sponsor of today’s conference. I would very much like to be able to go back to the Prime Minister next time we meet to propose some ideas and a possible agenda on how Romania and the United States working under our Strategic Partnership can also tackle the issues that you are very much interested in and that is ensuring full and equal access to all the economic opportunities that exist in Romania.

So let me conclude by also encouraging you as you grow your companies, as you move into leadership positions, that you be the best possible model for younger women who might be following you; to employ women; to put them into leadership positions; to mentor and encourage them. I wish you a very successful day and workshop at the end of which if you have some ideas on how I can shape my conversation with the Prime Minister on how to shape these issues, we would very, very much like to hear from you. And let me just encourage at the end for you to be ambitious. Be ambitious; set your sights to the highest possible point and good luck!