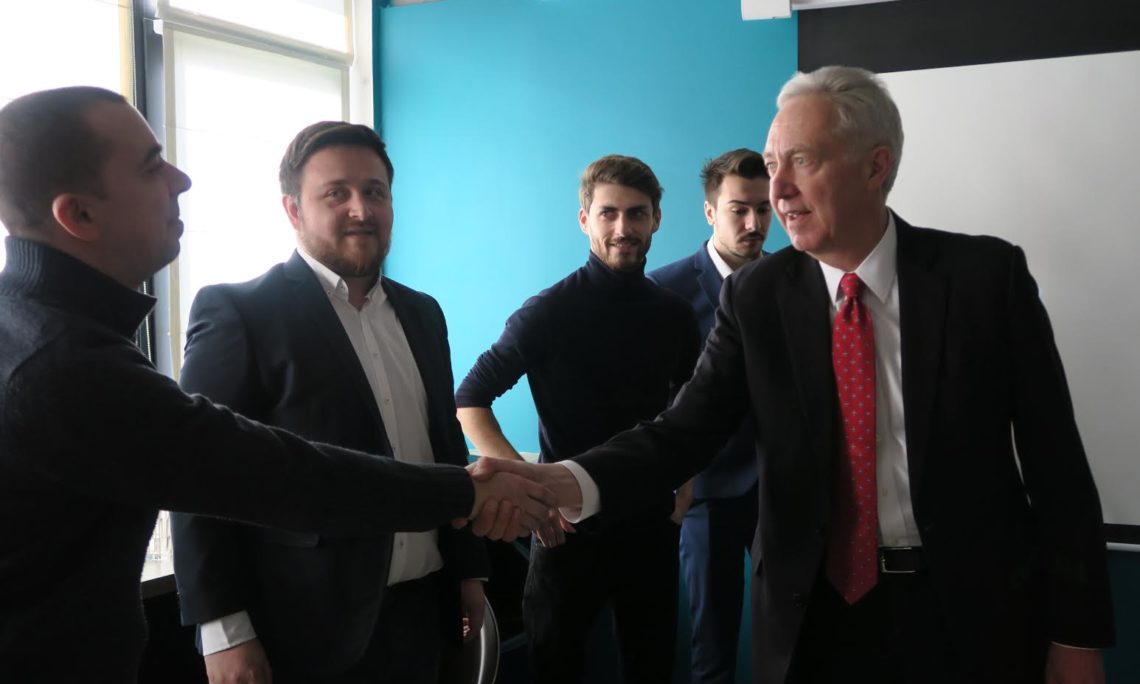 Thank you for this opportunity to be here this morning. I very much look forward to the heart of the program, which is to hear these young Romanian entrepreneurs make their pitch for their ideas and new technologies.

Florin asked me to briefly review what the United States or the United States Embassy does in this space to encourage innovation, entrepreneurship, a startup culture in Romania. But maybe a more important question is why is the United States interested in that. Fundamentally, it is because we have such a great partnership with Romania that we want a strong, wealthy, prosperous Romania in order to further build on what is already a great partnership and great collaboration in many, many areas. So, the economic growth that we’re currently seeing in Romania is something that is very, very welcome; the sponsorship of entrepreneurship, of innovation, of the startup culture is something that we see as being very supportive of long-term sustained economic growth in Romania. We are taking lessons that we have learned from the United States, where entrepreneurship, risk taking — a culture of risk taking — and a willingness to fail we believe have been very, very fundamental to the economic success that America has enjoyed over the centuries from Edison, Henry Ford, Tesla, more than a hundred years ago, to Jeff Bezos, to Steve Jobs, to Bill Gates and many others today.

Some of the things that we have done here in order to make a contribution is one to partner with actors like the Young Leaders Club, now with Golin, with Impact Hub, with Tech Hub, to support workshops, hackathons for example. A couple years ago, we had a monthly Entrepreneur of the Month program that was not focused on the tech sector, but not surprisingly, a number of people working in the tech sector were recipients or were acknowledged during that program. We have worked closely with the Romanian-American Foundation, the largest single grant-giver in the country to support their priorities, which include rural development, education and entrepreneurship. One of the things that we have done with RAF, with the Foundation, is to start a couple years ago a program where we send professors and university administrators to the United States to help develop their skills in business education, particularly around the subject of entrepreneurship. Already we have sent 12 Romanian educators to the United States for this post-doctorate level training and we have another six that will be going through the course of this year. We have financed now five Romanians to attend the Global Entrepreneurship Summits over the past couple of years in Silicon Valley in 2016 and in Hyderabad, India, last November. We also sent four young Romanians working in the tech field to the Transatlantic Young Entrepreneur Forum in the United States last year. We continue to look for opportunities like that. With RAF again, we launched last spring the first high school level robotics competition here in Romania, which was very successful in that the winners from the Romanian competition went on then to Saint Louis last summer to compete at the global level and came in third overall.

These are some of the programs that we have been supporting in the past. We are always looking for good ideas and stuff that we can do in collaboration with partners here in Romania, including at universities; we have a great relation with Politehnica, but also with a number of other universities around the country.

How are we doing in all of this? Just on Monday, Bloomberg published its annual survey of innovation at a national level around the world and Romania rose in this index by three places, from 38th to 35th in the past year, ahead of Estonia, ahead of Slovakia, ahead of Hong Kong even. And it’s particularly because of the strength that Romania has in STEM education (Science, Technology, Engineering, Mathematics) and concentration of graduates in those disciplines in research here in Romania. The United States on the other hand, is a higher ranking, at number 11, but actually slipped two places in the past year because of deficiencies in exactly this area: we have a declining ratio in the United States of engineering and science graduates as part of the entirety of university graduates, so a declining intensity in that area, that is contributing to a slip in our ability to innovate.

All of this means that there is constant attention that needs to be paid at the policy level to ensure ease of doing business, of being able to start a company in both the United States and Romania; then also a need for stability, predictability, transparency and quality of governance — this is something that the United States, that our Embassy and I have repeatedly spoken about in the past years.

With that, let me just say again thank you to the Young Leaders Club and Golin for this invitation to be with you this morning. I really look forward to hearing now your pitches. Good luck and succes!